View sample bacterial meningitis research paper. Browse research paper examples for more inspiration. If you need a health research paper written according to all the academic standards, you can always turn to our experienced writers for help. This is how your paper can get an A! Feel free to contact our writing service for professional assistance. We offer high-quality assignments for reasonable rates.

The estimated incidence of bacterial meningitis is 0.6 to 4 per 100 000 per year in developed countries, and may be up to ten times higher in other parts of the world (van de Beek et al., 2006). The epidemiology of bacterial meningitis has substantially changed over the last two decades. Meningitis due to Haemophilus influenzae type b has nearly been eliminated since routine childhood vaccination was initiated in many developed countries (Figure 1), and the introduction of conjugate vaccines against seven serotypes of Streptococcus pneumoniae has reduced the burden of childhood pneumococcal meningitis substantially (Peltola, 2000; Whitney et al., 2003). In some regions of the world, invasive infections due to Neisseria meningitidis serogroup C have increased over the last 10 years, prompting the introduction of routine immunization with meningococcal serogroup C protein-polysaccharide conjugate vaccines (Snape and Pollard, 2005). The main consequence of these kinds of routine vaccination programs in developed countries is that the age-specific incidence of bacterial meningitis has decreased in children, thus increasing the fraction of patients that are adults. The most common etiologic agents now are S. pneumoniae and N. meningitidis, which cause 80 to 85% of all cases (Saez-Llorens and McCracken, 2003; van de Beek et al., 2004). 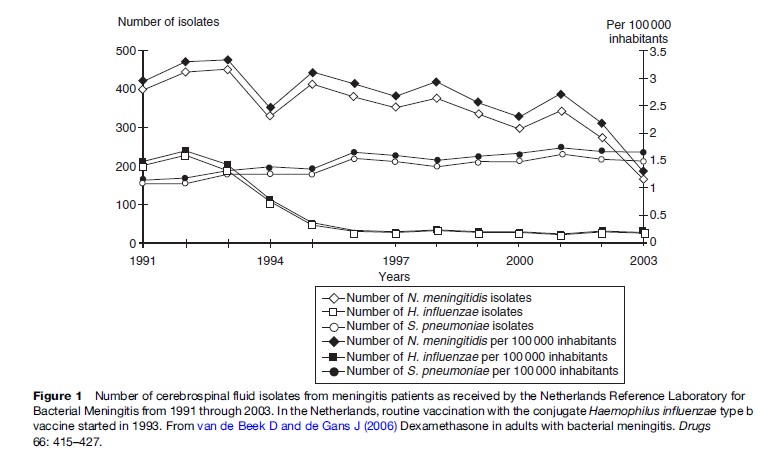 S. pneumoniae primarily causes respiratory infections, including otitis media, sinusitis, and pneumonia. Groups at increased risk of pneumococcal infection include children, elderly, immunocompromised patients (including those with human immunodeficiency virus type 1 infection), smokers, and certain other demographic groups. In contrast, N. meningitidis most commonly causes meningitis in young adults. Nasopharyngeal carriage of meningococci is an important factor that leads to the development of invasive disease. The estimated prevalence of meningococcal carriage is 5–10% under nonepidemic conditions (Snape and Pollard, 2005).

Another epidemiological trend is emergence of antibiotic-resistant strains of S. pneumoniae (Whitney et al., 2003). Pneumococcal resistance to penicillin, due to changes in its penicillin-binding proteins, was first reported in 1965. The prevalence of such resistance was limited until an epidemic of highly resistant pneumococci occurred in South Africa in 1977. Since then, resistance has developed worldwide, and in some regions it occurs in a frequency up to 70%. Reports of reduced susceptibility of pneumococci to several antibiotics, including broad-spectrum cephalosporins, have also been published. In response to this epidemiological trend, recommendations for suspected and confirmed bacterial meningitis have necessarily evolved.

When a patient presents to a physician for an emergent evaluation, the patient’s history and signs and symptoms can help to estimate the probability of meningitis. A wide variety of patient complaints may be elicited from patients with meningitis, and symptoms such as headache, nausea, and vomiting demonstrated poor sensitivity and specificity for the diagnosis of meningitis (van de Beek et al., 2004). The ‘classic triad’ of fever, neck stiffness, and change in mental status was found to be present in 44% of patients with bacterial meningitis; 95% of patients with bacterial meningitis presented with at least two signs or symptoms of headache, fever, neck stiffness, and alterations in mental status. At least one of these four elements was present in 99% of patients, so aspects of history and physical exam can be used to heighten suspicion for meningitis even if they cannot alone rule out the diagnosis.

Meningeal signs such as Kernig’s sign or Brudzinski’s sign are physical exam findings often documented when evaluating a patient for possible meningitis (Thomas et al., 2002). Kernig’s test involves flexing the hip and extending the knee, and a positive result is recorded when pain is elicited in the back and legs. Brudzinski’s neck test is typically performed in the supine position where the head is passively flexed and is interpreted as positive when flexion at the hips to lift the legs is elicited in response. A prospective study found that none of these signs accurately identified patients with meningitis, although this study included only adults. There was no correlation with moderate meningeal inflammation or with microbial evidence of infection, and Kernig’s sign and Brudzinski’s sign were found to have poor sensitivity (5%) with high specificity (95%). Thus, also these classic signs lack the adequate sensitivity to perform as screening tests to rule out meningitis, but when present they are concerning for an underlying meningitis and should be followed up with appropriate additional testing. 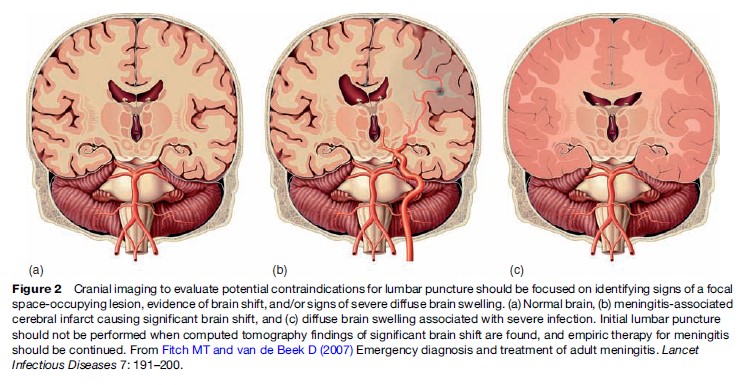 When lumbar puncture is completed and findings demonstrate increased white cell count in the CSF, thus confirming a diagnosis of meningitis, clinicians would like to determine which patients are at risk for the truly life-threatening bacterial meningitis versus those with a typically less concerning viral meningitis (Nigrovic et al., 2007). CSF findings are present in nearly all patients, although normal CSF parameters do occur. Individual predictors for the presence of bacterial meningitis are a glucose level <1.9 mmol l 1, a ratio of CSF glucose to blood glucose <0.23, a protein level >2.20 g l 1, a white cell count >2000/mm3, or a CSF neutrophil count >1180/mm3 (Spanos et al., 1989).

Gram staining and culture of CSF can identify the causative pathogen in approximately 80–85% of the patients (van de Beek et al., 2006). The sensitivity of bacterial antigen tests is limited; however, these tests may be helpful in patients with suspected bacterial meningitis and negative Gram staining and culture of CSF. A promising diagnostic tool in cases of suspected bacterial meningitis and negative CSF cultures is the amplification of bacterial DNA by polymerase chain reaction (PCR). Although high diagnostic sensitivity and specificity have been reported, further refinements and particularly a reduction of the false-positive rates are needed before PCR can be routinely recommended in the diagnosis of bacterial meningitis.

A delay in antimicrobial therapy (e.g., due to imaging, transfer to another hospital, or stabilization of vital signs) has been associated with an increased risk for adverse clinical outcome in adults with bacterial meningitis. Therefore, if imaging precedes lumbar puncture, blood cultures should be drawn and antimicrobial therapy with adjunctive dexamethasone initiated before imaging is performed (van de Beek et al., 2006).

The choice of initial antimicrobial therapy is based on the most common bacteria causing the disease based on age and/or clinical setting and on antimicrobial susceptibility patterns (Table 1). Also important are pharmacokinetics and pharmacodynamics of the antimicrobial agents, particularly the penetration into the CSF.

Once culture results and susceptibility testing are available, antimicrobial therapy can be modified for optimum treatment. With worldwide increases in prevalence of penicillin-resistant pneumococci, combination therapy of vancomycin plus a third-generation cephalosporin (either ceftriaxone or cefotaxime) has become the standard approach to empiric antimicrobial therapy.

Inflammation from any source in the central nervous system is poorly tolerated, and such inflammatory responses within the enclosed spaces of the brain and spinal cord have been demonstrated to lead to destructive secondary effects in basic science models. The CSF is effectively sterilized a few hours after beginning appropriate antimicrobial therapy, and Gram stain and culture are often negative within hours of antibiotic administration. The intense inflammatory response to bacterial infection within the enclosed spaces of the brain and spinal cord is thought to lead to significant morbidity and mortality despite effective antibiotic therapy. Therefore, pharmacologic attempts to modulate this inflammatory response may be an essential component of a successful strategy to treat this life-threatening disease, and dexamethasone is the only currently accepted adjunctive therapy for the treatment of patients with bacterial meningitis that has proven clinical efficacy.

In 2007, an updated Cochrane analysis on the efficacy and safety of adjunctive corticosteroid therapy included 20 randomized clinical trials (RCTs), involving 2750 patients (van de Beek et al., 2007). In this analysis, adjuvant corticosteroids were associated with lower case fatality rates and lower rates of severe hearing loss and long-term neurological sequelae. The use of corticosteroids was not associated with an increase of adverse events. The effect of corticosteroids was evident in adults with bacterial meningitis. In children the beneficial effect was less convincing, although there was a trend toward a beneficial effect on hearing loss in non-H. influenzae meningitis.

The available studies also do not address two other important issues concerning the corticosteroid regimen: the minimum duration of corticosteroid therapy and the maximum length of time after parenteral antibiotic therapy for commencement of corticosteroid therapy. In a post hoc analysis of an RCT of corticosteroids involving 301 adults with bacterial meningitis, the beneficial effect of dexamethasone on mortality in patients with pneumococcal meningitis was attributable to a reduction in systemic complications (de Gans and van de Beek, 2002). This could imply that the effect of dexamethasone is not restricted to the first hours after administration, although there are no clinical data to support this. In experimental pneumococcal meningitis, CSF bacterial concentrations at the start of therapy appeared to be more important than the timing of dexamethasone therapy in influencing the antimicrobial-induced inflammatory response.

Concerns have been raised over the interference by corticosteroids on CSF eradication of meningeal pathogens by reducing the blood–brain barrier permeability and thereby the penetration of antibiotics in the subarachnoid space. In both children and adults with acute bacterial meningitis, treatment of dexamethasone did not reduce vancomycin levels in the CSF; however, therapeutic failures have been described in adults treated with standard doses of vancomycin and adjunctive dexamethasone. Therefore, patients with pneumococcal meningitis who are treated with vancomycin and dexamethasone should be carefully observed throughout therapy.

Complications develop in the majority of patients with bacterial meningitis and may be difficult to predict. Therefore, monitoring in a neurological-neurosurgical intensive care unit is recommended in order to recognize changes in consciousness or the development of new neurologic signs, to monitor for subtle seizures, and to more effectively treat severe agitation (van de Beek et al., 2006). Bacterial meningitis is often associated with septic shock, which is an important predictor for outcome.

A common cause of a decline of consciousness in the patient with bacterial meningitis is clinical evidence of meningoencephalitis. The release of proinflammatory mediators in the subarachnoid space leads to an inflammatory response in the central nervous system, which contributes to increased blood–brain barrier permeability, cerebral edema, and increased intracranial pressure. For patients with decline of consciousness, or for those who fail to improve after initiation of appropriate antimicrobial therapy, brain imaging is indicated. The indication for repeated imaging is often arbitrarily based on the clinical status of the patient, the time frame between decline of consciousness and initiation of adequate therapy, and results of previous imaging. On neuroimaging, early signs of brain edema are disappearance of sylvian fissures and narrowing of ventricular size. In patients with an advanced stage of brain edema and raised intracranial pressure, basal cisterns and sulci may become obliterated. Several supportive therapies have been described in such patients, although no therapy has proven clinical efficacy. Osmotic diuretics to control intracranial pressure may be an option, although there are no definitive data on the efficacy of this approach.

Seizures and acute hydrocephalus are other frequent causes of a deteriorating level of consciousness. Patients with seizures or clinical suspicion of prior seizure should receive anticonvulsant therapy, but the low incidence of this complication does not justify prophylactic treatment. In patients with acute and non-obstructive (communicating) hydrocephalus, a lumbar puncture can allow measurement of CSF pressure.

Community-acquired bacterial meningitis is a severe disease with high fatality and morbidity rates (Saez-Llorens and McCracken, 2003; van de Beek et al., 2006). Meningitis caused by S. pneumoniae has the highest case fatality rates, reported from 19 to 37%. Of those who survive, up to 50% develop long-term neurologic sequelae, including cognitive impairment and developmental delays (van de Beek et al., 2002). For meningococcal meningitis, mortality and morbidity rates are lower, with rates up to 5 and 7%, respectively. The strongest risk factors for an unfavorable outcome in patients with bacterial meningitis are those indicative of systemic compromise, impaired consciousness, low CSF white cell count, and infection with S. pneumoniae.