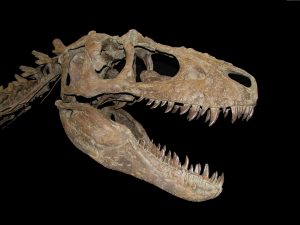 See our list of paleontology research paper topics. Paleontology is the science of ancient life-forms of past geologic periods. Paleontologists learn about ancient animals and plants mainly through the study of fossils. These may be the actual remains of the animal or plant or simply traces the organism left behind (tracks, burrows, or imprints left in fine sediments).

Scientists believe the earliest life-forms (primitive bacteria and algae) appeared on Earth some four billion years ago, at the beginning of the Precambrian era. Over time, these simple one-celled microorganisms evolved into soft-bodied animals and plants. To be preserved as a fossil, an animal must have a hard shell or bony structure. For this reason, there are no fossils older than about 600 million years, which marks the beginning of the Paleozoic era.

The fourth period of the Paleozoic era, lasting from 405 to 345 million years ago, is known as the Devonian period. This period saw the rise of fishes as the dominant life-form, and therefore marks the beginning of the Age of Fishes. The first vertebrates (animals with a backbone) were fishes, although these early fishes lacked jaws. The Devonian period also saw the rise of the earliest plants (such as ferns and mosses), insects, and amphibians (the first vertebrates to leave the oceans for dry land).

Reptiles—cold-blooded, air-breathing vertebrates that lay eggs— first evolved from amphibians about 320 million years ago during the Carboniferous period (fifth period of the Paleozoic era). They became the dominant species on land, however, during the Permian period, the last period of the Paleozoic era. Hence, this period marks the beginning of what is known as the Age of Reptiles. Lasting from about 280 to 250 years ago, the Permian period also saw the mass extinction of over 90 percent of marine species.

Reptiles continued to dominate the planet during the next era, the Mesozoic era, which lasted from about 250 to 65 million years ago. This era also saw the rise of the earliest flying reptiles and birds, conifers (cone-bearing) and deciduous trees, and flowering plants and grasses. However, this era is most prominently marked by the evolution of smaller reptiles into the dinosaurs, who appeared about 225 million years ago during the Triassic period (first period of the Mesozoic era). Dinosaurs roamed and governed the world for about 160 million years before they were wiped out in a mass extinction 65 million years ago. Scientists believe a huge asteroid struck Earth off the northern tip of the Yucatan Peninsula of Mexico. The resulting inferno from the impact killed hundreds of thousands of species and brought an end to the reign of the dinosaurs.

The Cenozoic era, the last 65 million years of Earth’s history, has seen the rise of warm-blooded mammals as the dominant form of life. Although the first land mammals were not as large as dinosaurs, they were much larger than present-day mammals. Around one million years ago, during the Pleistocene epoch of the Quaternary period, ancestors of modern humans became dominant, with many species of mammals becoming extinct in the process.