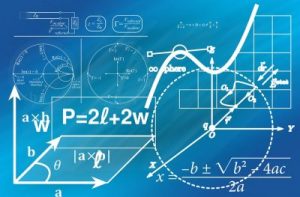 See our list of mathematics research paper topics. Mathematics is the science that deals with the measurement, properties, and relationships of quantities, as expressed in either numbers or symbols. For example, a farmer might decide to fence in a field and plant oats there. He would have to use mathematics to measure the size of the field, to calculate the amount of fencing needed for the field, to determine how much seed he would have to buy, and to compute the cost of that seed. Mathematics is an essential part of every aspect of life—from determining the correct tip to leave for a waiter to calculating the speed of a space probe as it leaves Earth’s atmosphere.

Mathematics undoubtedly began as an entirely practical activity— measuring fields, determining the volume of liquids, counting out coins, and the like. During the golden era of Greek science, between about the sixth and third centuries B.C., however, mathematicians introduced a new concept to their study of numbers. They began to realize that numbers could be considered as abstract concepts. The number 2, for example, did not necessarily have to mean 2 cows, 2 coins, 2 women, or 2 ships. It could also represent the idea of “two-ness.” Modern mathematics, then, deals both with problems involving specific, concrete, and practical number concepts (25,000 trucks, for example) and with properties of numbers themselves, separate from any practical meaning they may have (the square root of 2 is 1.4142135, for example).

Mathematics can be subdivided into a number of special categories, each of which can be further subdivided. Probably the oldest branch of mathematics is arithmetic, the study of numbers themselves. Some of the most fascinating questions in modern mathematics involve number theory. For example, how many prime numbers are there? (A prime number is a number that can be divided only by 1 and itself.) That question has fascinated mathematicians for hundreds of years. It doesn’t have any particular practical significance, but it’s an intriguing brainteaser in number theory.

Geometry, a second branch of mathematics, deals with shapes and spatial relationships. It also was established very early in human history because of its obvious connection with practical problems. Anyone who wants to know the distance around a circle, square, or triangle, or the space contained within a cube or a sphere has to use the techniques of geometry.

Algebra was established as mathematicians recognized the fact that real numbers (such as 4 and 5.35) can be represented by letters. It became a way of generalizing specific numerical problems to more general situations.

Over time, the methods used in analytic geometry were generalized to other fields of mathematics. That general approach is now referred to as analysis, a large and growing subdivision of mathematics. One of the most powerful forms of analysis—calculus—was created almost simultaneously in the early 1700s by English physicist and mathematician Isaac Newton (1642–1727) and German mathematician Gottfried Wilhelm Leibniz (1646–1716). Calculus is a method for analyzing changing systems, such as the changes that take place as a planet, star, or space probe moves across the sky.

Statistics is a field of mathematics that grew in significance throughout the twentieth century. During that time, scientists gradually came to realize that most of the physical phenomena they study can be expressed not in terms of certainty (“A always causes B”), but in terms of probability (“A is likely to cause B with a probability of XX%”). In order to analyze these phenomena, then, they needed to use statistics, the field of mathematics that analyzes the probability with which certain events will occur.

Each field of mathematics can be further subdivided into more specific specialties. For example, topology is the study of figures that are twisted into all kinds of bizarre shapes. It examines the properties of those figures that are retained after they have been deformed.