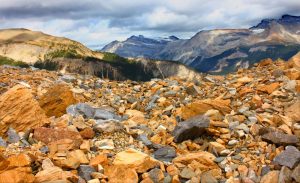 See our list of geology research paper topics. Geology is the science of Earth. Geologists study the planet—its formation, its internal structure, its materials, its chemical and physical processes, and its history. Mountains, valleys, plains, sea floors, minerals, rocks, fossils, and the processes that create and destroy each of these are all the domain of the geologist. Geology is divided into two broad categories of study: physical geology and historical geology.

Physical geology is concerned with the processes occurring on or below the surface of Earth and the materials on which they operate. These processes include volcanic eruptions, landslides, earthquakes, and floods. Materials include rocks, air, seawater, soils, and sediment. Physical geology further divides into more specific branches, each of which deals with its own part of Earth’s materials, landforms, and processes. Mineralogy and petrology investigate the composition and origin of minerals and rocks. Volcanologists check lava, rocks, and gases on live, dormant, and extinct volcanoes. Seismologists set up instruments to monitor and predict earthquakes and volcanic eruptions.

Historical geology is concerned with the chronology of events, both physical and biological, that have taken place in Earth’s history. Paleontologists study fossils (remains of ancient life) for evidence of the evolution of life on Earth. Fossils not only relate evolution, but also speak of the environment in which the organism lived. Corals in rocks at the top of the Grand Canyon in Arizona, for example, show a shallow sea flooded the area around 290 million years ago. In addition, by determining the ages and types of rocks around the world, geologists piece together continental and oceanic history over the past few billion years. Plate tectonics (the study of the movement of the sections of Earth’s crust) adds to the story with details of the changing configuration of the continents and oceans.

Environmental geologists attempt to minimize both the human impact on Earth and the impact of natural disasters on human kind. Hydrology and hydrogeology, two subdisciplines of environmental geology, deal specifically with water resources. Hydrologists study surface water whereas hydrogeologists study ground water. Both disciplines try to reduce the impact of pollution on these resources. Economic geologists focus on finding the minerals and fossil fuels (oil, natural gas, coal) needed to maintain or improve global standards of living.