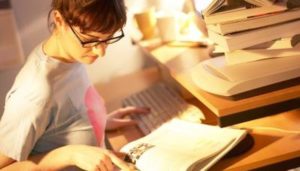 After the introduction, the conclusion is the most important part of the paper and, like the introduction, it is difficult to write. A good conclusion contains your parting thought—the idea that you most want your reader to remember. It should make a strong statement, one that resonates with your audience and ensures that any questions raised in your paper have been answered.

By the time you write the conclusion, you should have pointed out in the body of your research paper why your topic is important to the reader, and you should have presented the reader with all your arguments. It is critical that you do not introduce new information or ideas in your conclusion. If you find that you have not yet made the arguments you wished to make or pointed out evidence you feel is crucial to your reader’s understanding of your subject, you are not yet ready to write the conclusion; add another body paragraph before writing the conclusion.

Your research paper should have a strong, succinct concluding section, where you draw together your findings. Think of it as a conclusion, not a summary. The difference is that you are reaching overall judgments about your topic, not summarizing everything you wrote about it. How to write a conclusion for a research paper? The focus should be on:

You may also want to add some concise comments about possible future developments or what kind of research should come next, but don’t lay it on too thick. The place of honor goes to your own explanation. Don’t spend too much of your final section criticizing others. Don’t introduce any big new topics or ideas. You certainly don’t expect to see new characters in the last scene of a movie. For the same reasons, you shouldn’t find any big new topics being introduced in the last paragraphs of a research paper.

Your concluding statement should focus on what your findings mean. How do you interpret them? Are they just as easily explained by alternative theories or other perspectives? Here, you are returning to the questions that first animated you and answering them, based on your research. You not only want to give the answers; you also want to explain their significance. What do they mean for policy, theory, literary interpretation, moral action, or whatever? You are answering the old, hard question: “So what?”

Be wary of overreaching. You really need to do two things at the same time: explain the significance of your findings and stake out their limits. You may have a hunch that your findings apply widely but, as a social scientist, you need to assess whether you can say so confidently, based on your current research. Your reader needs to know: “Do these findings apply to all college students, to all adults, or only to white mice?” White mice don’t come up much in the humanities, but the reader still wants to know how far your approach reaches. Does your analysis apply only to this novel or this writer, or could it apply to a whole literary genre?

Make it a priority to discuss these conclusions with your professor or adviser. The main danger here is that students finally reach this final section with only a week or two left before the due date. They don’t have enough time to work through their conclusions and revise them. That leaves the research paper weakest at the end, precisely where it should be strongest, nailing down the most significant points.

Begin discussing your major findings with your adviser while you are still writing the heart of the research paper. Of course, your conclusions will be tentative at that stage, but it helps to begin talking about them. As always, a little writing helps. You could simply list your main findings or write out a few paragraphs about them. Either would serve as a launching pad for meetings with your adviser. You will find these discussions also shed light on the research that leads to these findings. That, in turn, will strengthen your middle sections. Later, when you draft the conclusion, review your notes on these talks and the short documents you wrote for them. They will serve as prewriting for the final section.

The opening sentence of the conclusion should flow smoothly and logically from the transition sentence in the previous paragraph and lead the reader to reflect on your thesis. A good conclusion however, does not simply restate the thesis. You want to remind the reader of the thesis in your conclusion but reword it in a stronger fashion so that it is interesting and memorable to your audience.After reminding the reader of the thesis, the conclusion should then reflect on the topics in the body of the paper and summarize the key findings of your research. If you are writing a persuasive paper, it should summarize your key arguments and logically point your readers to the conclusion you wish them to reach.

Phrases for Conclusions of Research Papers

As an example of how to end your research paper, let’s turn again to John Dower’s splendid book on postwar Japan, Embracing Defeat: Japan in the Wake of World War II. In the final pages, Dower pulls together his findings on war-ravaged Japan and its efforts to rebuild. He then judges the legacies of that period: its continuing impact on the country’s social, political, and economic life. Some insights are unexpected, at least to me. He argues that Japan has pursued trade protection as the only acceptable avenue for its persistent nationalism. America’s overwhelming power and Japan’s self-imposed restraints—the intertwined subjects of the book—blocked any political or military expression of Japan’s nationalist sentiment. Those avenues were simply too dangerous, he says, while economic nationalism was not. Dower ends with these paragraphs:

The Japanese economists and bureaucrats who drafted the informal 1946 blueprint for a planned economy were admirably clear on these objectives [of “demilitarization and democratization”]. They sought rapid recovery and maximum economic growth, of course—but they were just as concerned with achieving economic demilitarization and economic democracy. . . . Japan became wealthy. The standard of living rose impressively at every level of society. Income distribution was far more equitable than in the United States. Job security was assured. Growth was achieved without inordinate dependence on a military-industrial complex or a thriving trade in armaments.

These are hardly trivial ideas, but they are now being discarded along with all the deservedly bankrupt aspects of the postwar system. The lessons and legacies of defeat have been many and varied indeed; and their end is not yet in sight. (John W. Dower, Embracing Defeat: Japan in the Wake of World War II. New York: W. W. Norton, 1999, pp. 563–64)

Remember the anecdotal opening of Herbert’s book Impressionism: Art, Leisure, and Parisian Society, with Henry Tuckerman’s 1867 arrival in a much-changed Paris? (see research paper introduction examples) Herbert strikes a completely different tone in his conclusion. It synthesizes the art history he has presented, offers a large judgment about where Impressionism fits among art movements, and suggests why exhibitions of Monet, Manet, and Renoir are still so popular. He manages to do all that in a few well-crafted sentences:

Although we credit [Impressionism] with being the gateway to modern art, we also treat it as the last of the great Western styles based upon a perception of harmony with natural vision. That harmony, long since lost to us in this century of urbanization, industrialization, and world wars, remains a longed-for idea, so we look back to Impressionism as the painting of a golden era. We flock into exhibitions of paintings that represent cafes, boating, promenading, and peaceful landscapes precisely because of our yearning for less troubled times. The only history that we feel deeply is the kind that is useful to us. Impressionism still looms large at the end of the twentieth century because we use its leisure-time subjects and its brilliantly colored surfaces to construct a desirable history. (Herbert, Impressionism, p. 306)

[Johnson’s] presidency was a story of great achievement and terrible failure, of lasting gains and unforgettable losses. . . . In a not so distant future, when coming generations have no direct experience of the man and the passions of the sixties are muted, Johnson will probably be remembered as a President who faithfully reflected the country’s greatness and limitations—a man notable for his successes and failures, for his triumphs and tragedy.

Only one thing seems certain: Lyndon Johnson will not join the many obscure—almost nameless, faceless—Presidents whose terms of office register on most Americans as blank slates. He will not be forgotten. (Robert Dallek, Flawed Giant: Lyndon Johnson and His Times, 1961–1973. New York: Oxford University Press, 1998, p. 628)

Some writers not only synthesize their findings or compare them to others; they use the conclusion to say what their work means for appropriate methods or subject matter in their field. That is what Robert Bruegmann does in his final statement in The Architects and the City: Holabird & Roche of Chicago, 1880–1918. His conclusion goes beyond saying that this was a great architectural firm or that it designed buildings of lasting importance. Bruegmann tells us that Holabird & Roche helped shape modern Chicago and that its work, properly studied, helps us understand “the city as the ultimate human artifact”:

Traditional architectural history has tended to see the city less as a process than as a product, a collection of high art architectural objects in a setting dominated by mundane buildings of little interest. This tended to perpetuate a destructive and divisive attitude about the built environment, suggesting that only a few buildings are worthy of careful study and preservation while all others are mere backdrop. I hope that these explorations in the work of Holabird & Roche have shed light on parts of the city rarely visited by the architectural historian and on some little explored aspects of its history. If so, perhaps it has achieved its most basic goal: providing an insight into the city as the ultimate human artifact, our most complex and prodigious social creation, and the most tangible result of the actions over time of all its citizens. (Robert Bruegmann, The Architects and the City: Holabird & Roche of Chicago, 1880–1918. Chicago: University of Chicago Press, 1997, p. 443)

These are powerful conclusions, ending major works of scholarship on a high note. What concluding paragraphs should never do is gaze off into the sunset, offer vague homilies, or claim you have found the meaning of human existence. Be concrete. Stick to your topic. Make sure your research paper conclusions stand on solid ground. Avoid vague platitudes in your conclusion. Your goal should be reaching strong, sound judgments, firmly grounded in your readings and research. Better to claim too little than too much. Best of all, claim what you’ve earned the right to say: what your research really means.

Having finished the main parts of a research paper you can write an abstract.

Back to How To Write A Research Paper.