The main part of your research paper is called “the body.” To write this important part of your paper, include only relevant information, or information that gets to the point. Organize your ideas in a logical order—one that makes sense—and provide enough details—facts and examples—to support the points you want to make. 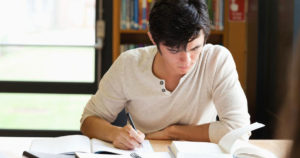 The first sentence of your body should continue the transition from the end of your introduction to present your first topic. Often too, your first sentence will be your “topic sentence,” the sentence that presents the topic, point, or argument that will be presented in the paragraph. The body of the paragraph should contain evidence, in the form of a discussion using quotations and examples, that supports or “proves” the topic. The final sentence of the paragraph should provide a transition to the third paragraph of the paper where the second topic will be presented.

The topic of each paragraph will be supported by the evidence you itemized in your outline. However, just as smooth transitions are required to connect your paragraphs, the sentences you write to present your evidence should possess transition words that connect ideas, focus attention on relevant information, and continue your discussion in a smooth and fluid manner.

A paper that makes claims or states ideas without backing them up with facts or clarifying them with examples won’t mean much to readers. Make sure you provide enough supporting details for all your ideas. And remember that a paragraph can’t contain just one sentence. A paragraph needs at least two or more sentences to be complete. If a
paragraph has only one or two sentences, you probably haven’t provided enough support for your main idea. Or, if you have trouble finding the main idea, maybe you don’t have one. In that case, you can make the sentences part of another paragraph or leave them out.

Arrange the paragraphs in the body of your paper in an order that makes sense, so that each main idea follows logically from the previous one. Likewise, arrange the sentences in each paragraph in a logical order.

In addition to keeping your ideas in logical order, transitions are another way to guide readers from one idea to another. Transition words and phrases are important
when you are suggesting or pointing out similarities between ideas, themes, opinions, or a set of facts. As with any perfect phrase, transition words within paragraphs should not be used gratuitously. Their meaning must conform to what you are trying to point out, as shown in the examples below:

Other phrases that can be used to make transitions or connect ideas within paragraphs include:

Remember, a sentence should express a complete thought, one thought per sentence—no more, no less. The longer and more convoluted your sentences become, the more likely you are to muddle the meaning, become repetitive, and bog yourself down in issues of grammar and construction. In your first draft, it is generally a good idea to keep those sentences relatively short and to the point. That way your ideas will be clearly stated.You will be able to clearly see the content that you have put down—what is there and what is missing—and add or subtract material as it is needed. The sentences will probably seem choppy and even simplistic.The purpose of a first draft is to ensure that you have recorded all the content you will need to make a convincing argument. You will work on smoothing and perfecting the language in subsequent drafts.

If an idea is controversial, you may need to add extra evidence to your paragraphs to persuade your reader. You may also find that a logical argument, one based solely on your evidence, is not persuasive enough and that you need to appeal to the reader’s emotions. Look for ways to incorporate your research without detracting from your argument.

It is often difficult to write transitions that carry a reader clearly and logically on to the next paragraph (and the next topic) in an essay. Because you are moving from one topic to another, it is easy to simply stop one and start another. Great research papers, however, include good transitions that link the ideas in an interesting discussion so that readers can move smoothly and easily through your presentation. Close each of your paragraphs with an interesting transition sentence that introduces the topic coming up in the next paragraph.

Transition sentences should show a relationship between the two topics.Your transition will perform one of the following functions to introduce the new idea:

Transitions make a paper flow smoothly by showing readers how ideas and facts follow one another to point logically to a conclusion. They show relationships among the ideas, help the reader to understand, and, in a persuasive paper, lead the reader to the writer’s conclusion.

Each paragraph should end with a transition sentence to conclude the discussion of the topic in the paragraph and gently introduce the reader to the topic that will be raised in the next paragraph. However, transitions also occur within paragraphs—from sentence to sentence—to add evidence, provide examples, or introduce a quotation.

The type of paper you are writing and the kinds of topics you are introducing will determine what type of transitional phrase you should use. Some useful phrases for transitions
appear below. They are grouped according to the function they normally play in a paper. Transitions, however, are not simply phrases that are dropped into sentences. They are constructed to highlight meaning. Choose transitions that are appropriate to your topic and what you want the reader to do. Edit them to be sure they fit properly within the sentence to enhance the reader’s understanding.

Transition Phrases to Show a Process:

How to Make Effective Transitions

How to make effective transitions between sections of a research paper? There are two distinct issues in making strong transitions:

The first is the most important: Does the upcoming section actually belong in the next spot? The sections in your research paper need to add up to your big point (or thesis statement) in a sensible progression. One way of putting that is, “Does the architecture of your paper correspond to the argument you are making?” Getting this architecture right is the goal of “large-scale editing,” which focuses on the order of the sections, their relationship to each other, and ultimately their correspondence to your thesis argument.

After you’ve placed the sections in the right order, you still need to tell the reader when he is changing sections and briefly explain why. That’s an important part of line-by-line editing, which focuses on writing effective sentences and paragraphs.

Effective transition sentences and paragraphs often glance forward or backward, signaling that you are switching sections. Take this example from J. M. Roberts’s History of Europe. He is finishing a discussion of the Punic Wars between Rome and its great rival, Carthage. The last of these wars, he says, broke out in 149 B.C. and “ended with so complete a defeat for the Carthaginians that their city was destroyed . . . .” Now he turns to a new section on “Empire.” Here is the first sentence: “By then a Roman empire was in being in fact if not in name.”(J. M. Roberts, A History of Europe. London: Allen Lane, 1997, p. 48) Roberts signals the transition with just two words: “By then.” He is referring to the date (149 B.C.) given near the end of the previous section. Simple and smooth.

Michael Mandelbaum also accomplishes this transition between sections effortlessly, without bringing his narrative to a halt. In The Ideas That Conquered the World: Peace, Democracy, and Free Markets, one chapter shows how countries of the North Atlantic region invented the idea of peace and made it a reality among themselves. Here is his transition from one section of that chapter discussing “the idea of warlessness” to another section dealing with the history of that idea in Europe.

The widespread aversion to war within the countries of the Western core formed the foundation for common security, which in turn expressed the spirit of warlessness. To be sure, the rise of common security in Europe did not abolish war in other parts of the world and could not guarantee its permanent abolition even on the European continent. Neither, however, was it a flukish, transient product . . . . The European common security order did have historical precedents, and its principal features began to appear in other parts of the world.

The security arrangements in Europe at the dawn of the twenty-first century incorporated features of three different periods of the modern age: the nineteenth century, the interwar period, and the ColdWar. (Michael Mandelbaum, The Ideas That Conquered the World: Peace, Democracy, and Free Markets. New York: Public Affairs, 2002, p. 128)

It’s easier to make smooth transitions when neighboring sections deal with closely related subjects, as Mandelbaum’s do. Sometimes, however, you need to end one section with greater finality so you can switch to a different topic. The best way to do that is with a few summary comments at the end of the section. Your readers will understand you are drawing this topic to a close, and they won’t be blindsided by your shift to a new topic in the next section.

Here’s an example from economic historian Joel Mokyr’s book The Lever of Riches: Technological Creativity and Economic Progress. Mokyr is completing a section on social values in early industrial societies. The next section deals with a quite different aspect of technological progress: the role of property rights and institutions. So Mokyr needs to take the reader across a more abrupt change than Mandelbaum did. Mokyr does that in two ways. First, he summarizes his findings on social values, letting the reader know the section is ending. Then he says the impact of values is complicated, a point he illustrates in the final sentences, while the impact of property rights and institutions seems to be more straightforward. So he begins the new section with a nod to the old one, noting the contrast.

In commerce, war and politics, what was functional was often preferred [within Europe] to what was aesthetic or moral, and when it was not, natural selection saw to it that such pragmatism was never entirely absent in any society. . . . The contempt in which physical labor, commerce, and other economic activity were held did not disappear rapidly; much of European social history can be interpreted as a struggle between wealth and other values for a higher step in the hierarchy. The French concepts of bourgeois gentilhomme and nouveau riche still convey some contempt for people who joined the upper classes through economic success. Even in the nineteenth century, the accumulation of wealth was viewed as an admission ticket to social respectability to be abandoned as soon as a secure membership in the upper classes had been achieved.

Note the phrase, “on the surface.” Mokyr is hinting at his next point, that surface appearances are deceiving in this case. Good transitions between sections of your research paper depend on:

Every good paper ends with a strong concluding paragraph. To write a good conclusion, sum up the main points in your paper. To write an even better conclusion, include a sentence or two that helps the reader answer the question, “So what?” or “Why does all this matter?” If you choose to include one or more “So What?” sentences, remember that you still need to support any point you make with facts or examples. Remember, too, that this is not the place to introduce new ideas from “out of the blue.” Make sure that everything you write in your conclusion refers to what you’ve already written in the body of your paper.

Back to How To Write A Research Paper.