View sample Sleep States And Somatomotor Activity Research Paper. Browse other  research paper examples and check the list of research paper topics for more inspiration. If you need a religion research paper written according to all the academic standards, you can always turn to our experienced writers for help. This is how your paper can get an A! Feel free to contact our custom writing services for professional assistance. We offer high-quality assignments for reasonable rates.

The drive to sleep has an awesome power over our lives. If we go without sleep or drastically reduce it, the desire to sleep quickly becomes more important than life itself. The willingness to go to extraordinary eﬀorts in order to obtain even a little sleep demonstrates vividly that sleep is a vital and necessary behavior. In fact, we often allow ourselves to be placed in life-threatening situations in order to satisfy the need to sleep.

But what is sleep, really? All of us feel, at some basic level, that we really do understand what sleep is all about. We certainly know how it feels, and the ‘meaning’ of the word is generally accepted in ordinary conversation. But, in point of fact, no one knows what sleep really is. Once we proceed beyond a simple description of an apparently quiet state that is somehow diﬀerent from wakefulness, we ﬁnd that the following major questions about the nature of sleep are largely unanswered: Why do we sleep?; What is (are) the function(s) of sleep?; What are the mechanisms that initiate and sustain sleep?; and, How, when and why do we wake up?

In order to understand ‘sleep,’ we must clarify the key processes and mechanisms that initiate and maintain this state. From a purely descriptive point of view, we simply need to know what is going on in the brain (and body) during sleep. But ﬁrst, we must agree on how to describe and/or deﬁne those behaviors that we intuitively understand as constituting the sleep states.

Traditionally, three physiological measures are employed for describing the states of sleep in controlled laboratory situations. They are the EEG (electroencephalogram, which reﬂects the electrical activity of the cerebral cortex), the EOG (electrooculogram, which is a recording of eye movements), and the EMG (electromyogram, which is an indication of the degree of muscle activity, i.e., contraction). Together, these measures are used to deﬁne and diﬀerentiate sleep in mammals, which is comprised of two very diﬀerent states. These states are called nonrapid eye movement (NREM) sleep and rapid eye movement (REM) sleep: each is nearly as diﬀerent from the other as both are distinct from wakefulness.

The cortical EEG during REM sleep closely resembles the EEG of active wakefulness, i.e., it is of low voltage and high frequency. This is a surprising ﬁnding, considering that these two states are so dramatically diﬀerent from a behavioral point of view. Bursts of rapid eye movements occur phasically during REM sleep. These eye movements are similar to those which would occur during wakefulness if one were looking at an object that went from right to left and then from left to right, rapidly and continuously, for a couple of seconds at a time. During REM sleep there is also a nonreciprocal ﬂaccid paralysis, i.e., atonia, of the major muscle groups (with the principal exception being certain muscles used in respiration). However, at intervals that usually coincide with the phasic periods of rapid eye movements, there are brief muscle twitches that involve principally, but not exclusively, the distal muscles (e.g., the muscles of the ﬁngers, toes, and face). 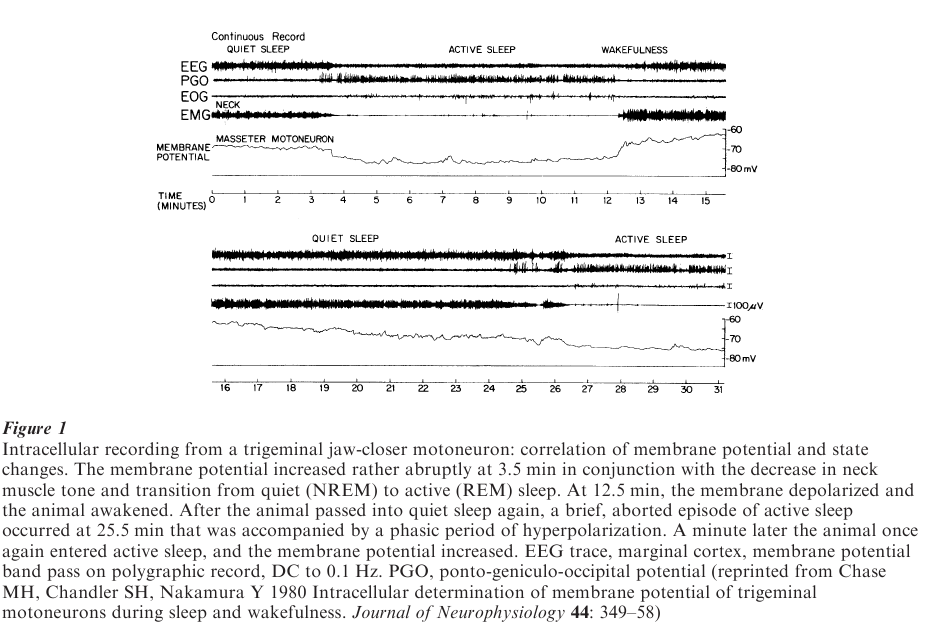 Because there is very little motor behavior during NREM sleep, the present overview of somatomotor activity during sleep consists mainly of a description of motor events which take place during REM sleep and entails: (a) an exploration of the mechanisms that control muscle activity during this sleep state, and (b) a description of the ‘executive’ mechanisms that are responsible for these REM sleep-related patterns of motor control (Chase and Morales 1994).

In order to understand the mechanisms responsible for the control of motor activity during REM sleep, it is important to ﬁrst describe the changes in muscle ﬁber activity that occur during this state. The passage from wakefulness to NREM sleep is accompanied by a decrease in the degree of contraction of somatic muscle ﬁbers, that is, there is a decrease in muscle tone, i.e., hypotonia. Surprisingly, during the state of REM sleep there occurs somatomotor atonia, or the complete lack of tone of many somatic muscles (Fig. 1). In order to understand how atonia of the somatic musculature during REM sleep is achieved, it is necessary to understand how the activity of muscle ﬁbers are, in general, controlled.

First of all, muscles (i.e., muscle ﬁbers) do one thing, they contract/shorten. When muscle ﬁbers contract, they do so because command signals, which are really trains of action potentials, travel from the cell bodies of motoneurons along their axons to activate muscle ﬁbers by changing the permeability of the muscle ﬁber membrane. A great many muscle groups are constantly contracting, at least to some degree, when we maintain a speciﬁc posture or perform a movement when we are awake. Thus, tone or some degree of muscle ﬁber contraction is dependent on the asynchronous, sustained discharge of motoneurons and the action potentials that travel down their axons to initiate the contraction of muscle ﬁbers.

There is a gradual, but slight decline in muscle tone during NREM sleep compared with wakefulness. During REM sleep, there is such a strikingly potent suppression of muscle activity and motoneuron discharge. This results in a complete loss of muscle tone, or atonia. Thus, the key to understanding atonia during REM sleep resides in understanding the manner in which the activity of motoneurons is reduced or eliminated during this state. 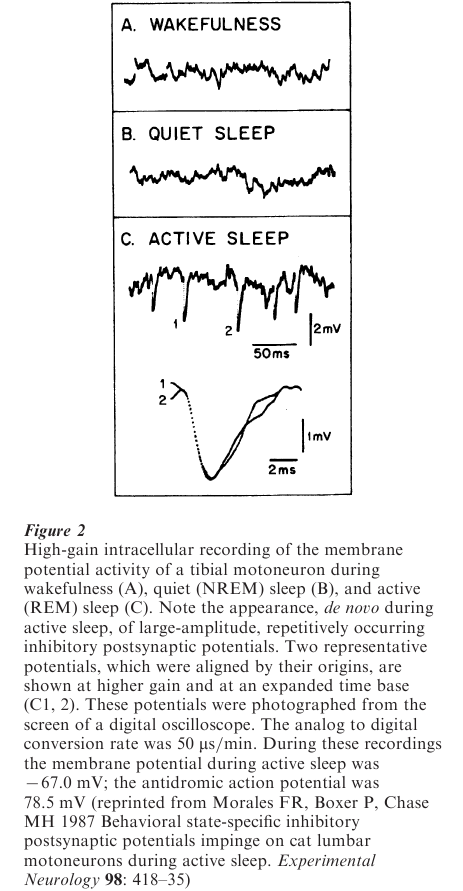 During REM sleep, it has been found that motoneurons become hyperpolarized, and as a consequence, they become relatively unresponsive to excitatory input. Analyses of the various membrane properties of these motoneurons indicate that their lack of responsiveness is due primarily to postsynaptic inhibition (Fig. 1). Thus, it is clear that postsynaptic inhibition is the primary mechanism that is responsible for atonia of the somatic musculature during this state.

Postsynaptic inhibition of motoneurons during REM sleep occurs when certain neurons which are located in the brainstem liberate glycine at their point of contact with motoneurons, which is called the synapse. When glycine is liberated, motoneurons respond by generating changes in their membrane properties and their ability to discharge, which are recorded as ‘inhibitory’ postsynaptic potentials.

In summary, postsynaptic inhibition is the principal process that is responsible for the atonia of the somatic musculature during REM sleep. This postsynaptic process is dependent on the presence of REM sleepspeciﬁc inhibitory potentials, which arise because glycine (an inhibitory neurotransmitter) is released by presynaptic neurons onto the surface of postsynaptic motoneurons.

All of the inhibitory phenomena that have been described in the previous sections are not only present but also enhanced during the phasic rapid eye movement periods of REM sleep. How, then, could there be twitches and jerks of the eyes and limbs during phasic rapid eye movement periods when there is also enhanced inhibition? The answer is simple: most of these periods are accompanied not only by increased motoneuron inhibition but also by potent motor excitatory drives that impinge on motoneurons. Thus, during these phasic periods of REM sleep, even though there is a suppression of the activity of motoneurons, there occurs, paradoxically, the concurrent excitation of motoneurons whose discharge results in the activation of muscle ﬁbers (which leads to twitches and jerks, mainly of the limbs and ﬁngers) (Fig. 3). These patterns of activation reﬂect descending excitatory activity emanating from diﬀerent nuclei in the pons and possibly from the forebrain as well. 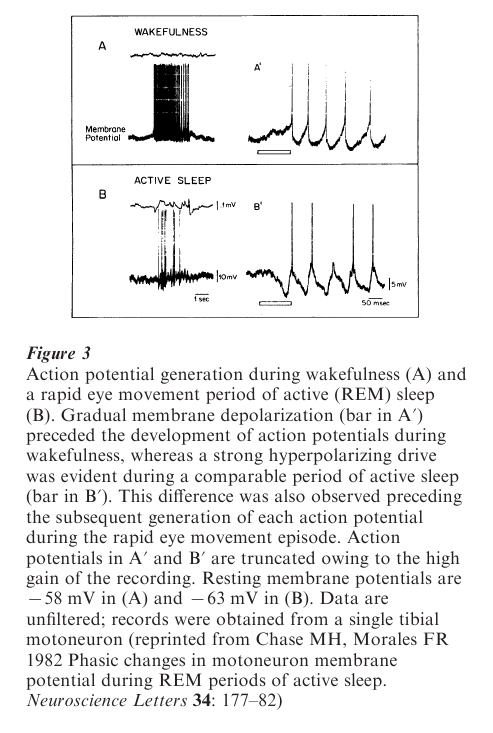 Consequently, from time to time, and for reasons as yet unknown, during REM sleep excitatory drives overpower the enhanced inhibitory drives. When this occurs, motoneurons discharge and the muscle ﬁbers that they innervate contract. Thus, there is an increase in excitatory drives that is actually accompanied by an increase in inhibitory drives (Fig. 3). When motoneurons discharge during the REM periods of active sleep, contraction of the muscles that they innervate is unusual because the resultant movements are abrupt, twitchy, and jerky; they are also without apparent purpose.

3. The Executive Control Mechanism For Somatomotor Activity During REM Sleep

The preceding description of the neural control of somatomotor control during REM sleep can also be viewed from the perspective of the central nervous system executive mechanisms that are responsible this physiological pattern of activity. A critical structure that is involved in the generation and/or maintenance of REM sleep, and especially, the motor inhibitory aspects of this state, is the nucleus pontis oralis, which is located in the rostral portion of the pontine reticular tegmentum. This area is thought to be activated by cholinergic ﬁbers that arise from cell bodies that are located in the laterodorsal pontine tegmentum and the pedunculo pontine tegmentum.

There is evidence that a neuronal mechanism that resides within or is part of the nucleus pontis oralis is involved in the generation of wakefulness (and motor excitation) as well as REM sleep (and motor inhibition). For example, studies of the nucleus pontis oralis have shown that it is central to the phenomenon of reticular response reversal. This is a phenomenon wherein stimulation of this pontine nucleus results in an increase in somatic reﬂex activity during wakefulness, but remarkably, the identical stimulus during REM sleep yields potent postsynaptic inhibition of the same somatic reﬂexes.

We have suggested the existence of a neuronal switch, based on the phenomena of reticular response reversal, that is responsible for controlling the animal’s state and somatomotor inhibitory processes during wakefulness as well as REM sleep. The existence of this switch is based on the hypothesis that wakefulness occurs when inhibitory (GABAergic) neurons in the nucleus pontis oralis suppress the activity of REM sleep neurons that are also located in, or in the vicinity of, the nucleus pontis oralis (Xi et al. 1999). Thus, when REM sleep-controlling neurons discharge in this and related areas the result is the generation of this state and its attendant patterns of somatomotor inhibition.

In support of the preceding hypothesis, we have found that when the inhibitory neurotransmitter GABA is placed in the nucleus pontis oralis, prolonged periods of wakefulness and heightened motor activity are elicited in cats. Conversely, the application of bicuculline, a GABAA antagonist, results in the occurrence of episodes of REM sleep and somatomotor inhibition of very long duration. We therefore conclude that a pontine GABAergic system plays a critical role in the control of wakefulness and REM sleep.

There are also recent data which demonstrates that when cells of the nucleus pontis oralis discharge, they initiate a cascade of events, the ﬁrst one being the excitation of a group of premotor inhibitory neurons in the lower part of the brainstem, i.e., in the medulla (Morales et al. 1999). Fibers from these medullary neurons release glycine onto motoneurons, which results in atonia of the somatic musculature.

When the motor inhibitory mechanisms of REM sleep cease to function properly, and there is still ongoing motoneuron excitation (and or enhanced motor excitation during the phasic periods of REM sleep), a syndrome occurs in cats that is called ‘REM without atonia.’ In humans, a comparable syndrome is called ‘REM Behavior Disorder.’ When humans and cats with this syndrome enter REM sleep, they begin to twitch violently, jump about and appear to act out their dreams; their sleep is quite disrupted and they are certainly a threat both to themselves and, of course, to others.

It is clear that the motor inhibition that occurs during REM sleep plays a critical role in the maintenance of this state. There is also no doubt that the simple release of glycine onto motoneurons during REM sleep, which results in atonia, i.e., a lack of muscle activity, has importance and implications of far-reaching and widespread proportions.