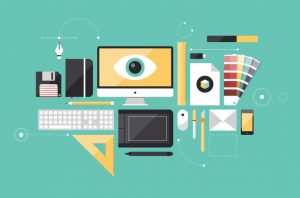 See our list of visual communication research paper topics. In communication and media studies the term ‘visual communication’ did not come into use until after World War II and has been used most often to refer to ‘pictures,’ still and moving, rather than the broader concept of ‘the visual.’ Studies of visual communication arose primarily in response to a lack of attention to the pictorial in mass communication research. The study of visual communication comprises such wide-reaching and voluminous literatures as art history; the philosophy of art and aesthetics; semiotics, cinema studies, television and mass media studies; the history and theory of photography; the history and theory of graphic design and typography; the study of word–image relationships in literary, aesthetic, and rhetorical theory; the development and use of charts, diagrams, cartography, and questions of geographic visualization; the physiology and psychology of visual perception; and the impact of new visual technologies, including digital imagery.

The rise of contemporary visual communication studies was preceded by centuries of thought and writing concerning the arts and the visual image. Yet the last decades of the twentieth century saw a renewed philosophical concern with the visual that Mitchell (1994) calls “the pictorial turn.” This increased attention to the visual can be seen as an outgrowth of scholarship on photography, which since the middle of the nineteenth century has continually explored and revisited the nature of the photographic image as a reflection of reality. Whether couched in terms of art vs. science, pictorial expression vs. mechanical record, or trace vs. transformation, the practice of photography has been dogged by ongoing contradictions between the craft of picture-making and the status of photographs as technological recording. Similarly, the extensive literature of film theory has revolved around questions of cinema’s proper aesthetic status.

An important foundation for the development of visual communication studies, film theory synthesized a body of concepts and tools borrowed from the study of art, psychology, sociology, language, and literature, and work in visual communication has often returned to these various sources for new applications to photography, design, electronic imaging, or virtual reality. Central issues have included the distinction between formative and realist theories, and the scope and centrality of narrative, issues that have preoccupied the philosophy of representation more generally.

The precise nature of visual images as copies or records continues to be a defining issue for visual communication studies in an era of ubiquitous photo-electronic reproduction, with various technical advances promising ever more convincing images and simulations of the external world. Against the commonsense assumptions so often made that visual media give us a window on reality, from the beginning photography and film studies have interrogated the ways in which such ‘windows’ are created and structured to shape our view.

British cultural studies also incorporated work on film and photography to analyze the culturally constructed nature of visual representation, what many Anglo scholars increasingly called ‘lens theory.’ Concurrently, interest in the psychology of the visual made its way through art history to visual media studies. For instance, Gombrich makes the case that picture forms of all kinds are conventionally constructed according to learned schemata, not simply copied from nature. Pictures rarely stand alone, and rarely communicate unambiguously when they do. Together with film theory, semiotics, and the social history of art, the psychology of visual representation has contributed to an eclectic body of theory and research on which communications scholars have drawn for conceptualizing approaches to visual communication analysis.

The social history of art offers models for investigating relationships between the production of images and the social contexts of their sponsorship, use, and interpretation. Alpers has explored the relation between picture- making and description. Baxandall’s (1972) study of painting and experience in fifteenth- century Italy provides a historical ethnography of patronage, contractual obligations, and viewer expectations, mapping a social world of visual communication. Becker’s Art Worlds (1982) applies a similar approach to twentieth-century social worlds of artistic production, with specific attention paid to photography.

Related to these extra-textual studies of visual communication practice and meaning is a long history of attention to the intertextual relationships between word and image. Whether in studies of the relationship between religious painting and scripture, pictures and narrative, or in attempts to pursue the study of iconology (the general field of images and their relation to discourse), the existence of pictures within larger multi-textual contexts has led to several rich traditions of scholarship.

Influenced by these parallel developments, social communication theorists in anthropology and sociology took an interest in the social and discursive role of visual images. In the 1960s and 1970s scholars studied the cultural codes and social contexts of image-making within particular communities, sub-cultures, and social groups. This movement was influenced by work in the psychology of art and representation, film theory, symbolic interactionism, semiotics, and the social history of art.

The key issues for visual communication in the new millennium are surprisingly similar to those of 30 years ago, although greater attention is being paid to these issues within communications studies itself. A still largely unmet challenge for visual communication scholars is to scan, chart, and interrogate the various levels at which images seem to operate: as evidence in visual rhetoric, as simulated reality bolstering and legitimizing the presence and status of media operations themselves, as abstract symbols and textual indices, or as ‘stylistic excess’ – the self-conscious performance of style. These issues are perhaps more significant than ever for the processes of ‘remediation’ that characterize new digital media and the emphases on ‘transparent immediacy’ and ‘hypermediacy’ that distinguish digital visualization.

There is an issue of particular concern to visual communication researchers as we proceed into an era of increasingly convincing virtual realism on the one hand, and an increasingly systemic textualization of images in cyberspace on the other. It is not just what we can do with new digital technologies of manipulation but to what purposes we seek to use the production of images in a ‘post-photographic age.’

Finally, in that emerging condition often referred to as the ‘global media environment’, visual images have become a new sort of transnational cultural currency. Not the ‘universal language’ that promoters such as Eastman Kodak claimed for photography earlier in the century, but a currency of media control and power, indices of the predominant cultural visions of predominant media industries.