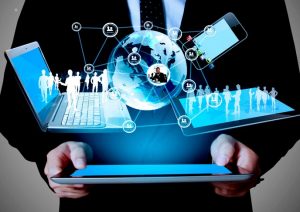 ICT innovation can be treated conceptually as either exogenous or endogenous to a social system. The exogenous perspective treats ICTs as if they are objects isolated from the social, political, and economic environment in which they are produced and consumed. If it is technology that is the determining factor in social organization, then what is left for the researcher is an observer role. The exogenous perspective emphasizes the efficiency and rationality of an autonomous technological system where there is little room for human agency.

In contrast, from an endogenous perspective, research focuses on the way ICTs become woven into the fabric of life – in terms of morality, the economy, culture, or the political world and on the specific, material conditions under which technology is produced and consumed. Technology is regarded as part of the social fabric where actors sanction certain forms of change and not others. Power is understood to be located in the interwoven alignment of state (administrative and military), private capital, and civil society interests. In this view, the emphasis is on the way technology mediates human relationships and on the constraints that distort benefits that might otherwise accrue to those who are not at the center of economic and political power (Curran et al. 2012; Mansell 2012; Silverstone 2007).

Among the many strands of research in this context are studies of the political implications of the information society for democracy and participation in public debate and in electoral processes and whether a right to communicate should be enshrined in international law (Jørgensen 2013). Within sociology, research on the domestication of technologies (Hartmann 2013) has helped to reveal that ICT artifacts are not prefigured by technology designers for their users, and that older and newer media and ICTs are appropriated in unpredictable ways depending on the cultural specificities of their use. Economic analysis tends to focus on the diffusion of ICTs and the implications for productivity in the economy since these technologies are classed as general-purpose technologies and associated with major transformations when they become widely dispersed across all ICT-using sectors of the economy (Freeman 2007).

The disruptive characteristics of innovations in ICTs have given rise to many debates about their positive or negative implications for the global order, with research emphasizing links between local and distant places and the sometimes unifying, and at other times fragmenting, consequences. There is no stable definition but the term virtual community generally applies to online interactions that give rise to new forms of relationships and new organizational forms. Research focuses on the network relations among activists, bloggers, scientists and many other communities of users of social media. The digital platforms that support these communicative activities are increasingly being used by researchers to map the architecture of networks and social relations with a focus on the directionality of communication, synchronicity, content modularity, interactivity, personalization, and meaning construction. Research on issues of information control, privacy, and security raised by user-generated content, the co-creation of content, and interactive Web 2.0 applications is beginning to tackle the implications of ‘big data’ analytics which uses web-harvesting, ratings systems, and identity profiling to support corporate and state information collection and processing activities (Mayer- Schönberger & Cukier 2013). Digital means of interacting online support the networking activities of individuals and of networked organizations which enable virtual teamworking and outsourcing, raising questions about the ownership of creative capabilities, privacy, and trust, whether the public can have confidence in the digital services provided by governments, and whether new forms of interaction are consistent with democratic practice.

When the diffusion of ICTs is uneven, or where the distribution of the gains as a result of investing in them is uneven, this is referred to as a digital divide. For some it is an article of faith that ICTs hold the solutions to economic, political, and cultural problems, while others argue that digital divides mean that it is unlikely that these technologies will alleviate deeply rooted social and economic problems. This concept has been criticized for its oversimplification of the factors that give rise to inequality and research focusing on digital literacies (including information literacy or media literacy) and cultural differences have yielded insight into the many forms and consequences of digital exclusion (Livingstone and Helsper 2010). Differences in views about the relationship between technology and communication and the persistence of digital divides are reflected in research on whether a global media and communication policy environment is feasible and the roles of the nation state and multistakeholder groups in governing digital media.

Different framings of the relationship between globalization and communication are echoed in research on the governance regimes that enable the production and consumption of ICTs and media content, locally and globally. The governance of Internet has become a hotly contested area of research drawing on legal expertise and examining the values embedded in the architecture of the Internet and other digital applications. Brown and Marsden (2013) provide comprehensive examinations of the proliferation of policies, regulations, and legislation in response to the global spread of digital networks and their applications, especially the Internet. In addition, there is research on specific online behaviors and whether there should be sanctions for ‘bad’ behavior in the case of hacktivism or crime and terrorism.

Finally, the relationship between technology and communication raises many issues with respect to ethical conduct within the humanities and the social sciences. Guidelines with respect to Internet-related research have been developed nationally and by organizations such as the Association of Internet Researchers (AoIR). Different methods raise concerns about the risks involved to researchers and to those they study.