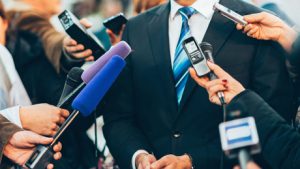 The Communication of Politics

In spite of impressive modernization trends, including, for example, the growing importance of visual communication, most of the discourse among political actors is still language based. Political elites use language for strategic purposes such as building a positive image, winning public support, or establishing specific perspectives for evaluation. On the other hand, language serves citizens to make sense of politics, form opinions, and take political decisions.

The mass media play a pivotal role in making the political discourse open to the public. Mass media select, process, and transmit political news and current affairs content. For ordinary citizens and even for political decision-makers, media coverage of politics is the most relevant and quite often the only source of information about current events.

By providing a platform for the public debate of political issues, the media construct a public sphere, that is, an open realm for the exchange of information and opinions among diverse political actors. However, according to Habermas (2006), the dynamics of public communication may be impaired by dominating powerful actors of the political center and by deficiencies of the media system, namely commercialization tendencies and connections with special interest groups.

Rather than confining their role to functioning as intermediaries, i.e., serving the information and publication needs of all groups in society, the media themselves have become powerful political actors, sometimes referred to as the fourth estate. Media organizations pursue policy objectives, for example, by expressing specific partisan opinions, by endorsing the interests of certain societal groups, or by legitimizing the views of those in power. This may have consequences for the balance of power among the classical political estates – legislative, executive, and judiciary – and thus raises questions concerning the definition of media freedom and mechanisms of media control.

Political Media Use and Effects

The evolution of mass media has brought about contradictory results as to citizens’ exposure to political information. On the one hand, due to a number of 24-hour news networks on radio and television and, in addition, a plethora of Internet news pages, the sheer volume of available political information has proliferated immensely. On the other hand, many mainstream broadcasters and newspapers have reduced their hard news coverage, especially foreign affairs reporting, and have instead extended the supply of entertaining content, soft news, and infotainment formats. This goes along with shrinking audiences for serious newspapers and public affairs programs in many countries. While politically attentive citizens benefit enormously from the enriched political media menu, particularly of the Internet, the majority audience seems to be content with being informed just about the most salient issues.

Television is still the main source of information about politics for the average citizen, though digital media are continuously gaining ground, particularly among the younger generation. A high correlation of political media use with certain demographic factors is responsible for large differences in the reach of political news and in citizens’ acquisition of political information. In all countries those who have a higher income, who are better educated, and who are more strongly interested in politics are the most attentive to political information. However, due to blurring lines between hard news, soft news, and light entertainment in some mass media, there is also a chance that politically inattentive citizens are unwittingly exposed to mediated politics.

As the study of mass communication is generally based on the premise of media effects, it is also a central presumption of political communication research that the media have a significant impact on politics (Graber 2005). A broad field of communication research is devoted to examining the influence of news and information on cognitions and attitudes. Another strand of research looks at influence processes in campaign contexts, for example in health campaigns, in political information campaigns, in social marketing campaigns, and most often in election campaigns.

As distinct from such rather pragmatic approaches to media effectiveness, there is a broad field of political communication research with a critical or pessimistic orientation that starts from the more or less explicit assumption that mass communication may have negative implications for democratic citizenship and for the political system as a whole. Among the harmful media effects that have been hypothesized are eroding trust in political institutions and political cynicisms.

Political Communication and Research in Flux

The advent of the Internet and other new media has removed some of the constraints that traditional media have imposed on communication processes. Because of the enormous increase in content diversity, citizens can choose according to their individual political preferences among an excessive variety of channels and media products. Bennett and Iyengar (2008) envisage a “new era of minimal effects” resulting from eroding media influences as audiences dissolve into increasingly self-selected segments. On the other hand, while audience members can select more freely, the traditional mass media are losing some of their gatekeeping and filtering functions. Thanks to the new communication technologies, citizens can easily bypass the mass media and disseminate messages via weblogs or Internet platforms such as YouTube, or in direct person-to-person networking. The new media enhance both mediated expressions of political opinion and personal political interaction.

Considerable political communication research attention is directed toward civic engagement. The label refers to research that tests the presumed (mal)functioning of mass media for political participation. Research on civic engagement includes studies with an explicit orientation to normative criteria, especially to standards derived from theories of democracy. A continuing theme in this field of research is the relationship between entertainment media and political engagement (see, e.g., Delli Carpini 2012).