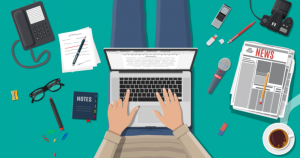 See our list of journalism research paper topics. Journalism is a constellation of practices that have acquired special status within the larger domain of communication through a long history that separated out news sharing from its origins in interpersonal communication. Telling others about events in one’s social and physical surroundings is a common, everyday activity in human cultures, and news as a genre of the interactions has the primary characteristic of being new to the listener. A main difficulty for sharing intelligence is ascertaining truth, or, put the other way round, distinguishing intelligence from gossip. Telling about events, supplying novelty, and discerning factual truth from the process are the main rudiments that came to define journalism as a cultural practice.

Journalism is a modern-era phenomenon that began its separation from ordinary communication first with correspondence in the form of newsletters sent out in multiple copies to existing social networks.

Newsletter authors also required some facility to produce more than one copy and to distribute the result, as well as sufficient social status to make their activity appear to have value for recipients. With the advent of the printing press some early newssheets imitated hand-made newsletters, but the primary model for all printing was the book as printer-editors incorporated the sharing of new intelligences into their line of business.

The main claim to distinction for journalism has come through a close alliance with political life. Politics impinged on printing from the beginning in the form of government controls, and printing itself quickly became a political act of either cooperation with or defiance of the powerful, or the state. Journalism developed at the nexus of negotiating boundaries to demarcate private life, civil society (or the market), and the state from each other, and in some perspectives that zone became a special or sacred space. It was a short step then for the emerging press to become enmeshed in politics, an alliance of two initially and perhaps continually unsavory activities, an irony often lost on practitioners and scholars. The nineteenth century turned newspapers into the central node of news as an economic activity.

Separating the occupation of journalist from author is one marker of a project under way by the early twentieth century to make journalism into a particular kind of profession. Other markers include the emergence of acceptable practices, training programs, associations, and codes of ethics. In many parts of the world, journalism remained part of and firmly aligned with literary work, and even in nations where the professional project predominated, such as the United States, movements of long-form and literary journalism arose.

From its birth in the industrialized newsroom, journalism developed customary patterns for all aspects of work. The best-known example is the ‘beat,’ combining location and process so that a reporter goes through a set of routines to gather information from predictable and reliable places. As an occupational category, journalism in the nineteenth century merged several tasks: principally those of the ‘editor,’ who managed some aspect of content from a central office, the ‘correspondent,’ who ventured out as a worldly traveler and (perhaps imperial) observer of affairs, and various forms of ‘news hound,’ who did piecework as local scavengers to fill the editorial hole by the inch, pursuing a particular topic or venue such as crime or the docks. As journalism emerged as a professional project, specialization produced new bundles of tasks.

The production of news content has become more portable across traditional print and broadcast media as the tasks journalists perform converge on digital technology. The changes might point to multimedia journalism or instead to a de-skilling of practice as the tools shift from professionals’ into others’ hands. In many countries, citizens can now tell each other their own news by writing and distributing it electronically from home, a community center, library, or mobile device. During political crises in Africa and the Arab uprisings of 2011, citizen journalists appear to have contributed to movements against established political power.

Alignments between industry and the academy for the purposes of job training helped shape journalism research. The first university journalism programs grew from the organized efforts of publishers and press associations to harness academic work to the project of making journalism respectable.

By the late 1940s, social science became the dominant paradigm for academic inquiry into journalism, organized generally around the concept of ‘mass communication.’ Humanities approaches fell behind, and studies employing quantitative methodology published in the journal of news media research, Journalism Quarterly, rose from 10 to 48 percent between 1937 and 1957. Earlier paradigms treated journalism as a powerful force in defining social problems, propagating government ideas, and fomenting public support, but the functionalist thinking among scholars at mid-century saw journalism as limited in its effects.

By the 1960s intellectual currents such as semiotics influenced thinking about journalism. Social scientists studied journalists’ autonomy from surrounding forces. By the 1970s fault lines emerged in the dominant social scientific paradigm after research found that greater effects could occur among distinct social groups than among general audiences, and that journalism had influence in setting priorities among political elites. In Britain cultural studies scholars analyzed journalism texts, and social critics described how capitalist ownership and shared values among media professionals helped support class domination. US sociologists examined news and conducted fieldwork among journalists.

In the early 1980s the communication discipline underwent a period of ferment, and journalism study moved along new vectors. Particularly in relation to political life, framing effects developed as a research approach. Under the emerging conditions of postmodernism, attention to news was declining among youth, and journalism as a professional project entered a conscious period of crisis. Industrial changes liberalized state-controlled media in some countries; cable, talk radio, and other alternatives to traditional news outlets proliferated in countries with commercial systems; and new populist media arose as tabloid journalism spread globally. Scholars of journalism engaged in political and economic critiques that examined the relationship of media organizations to centers of social control.

The ‘new journalism studies’ incorporated concepts of narrative, myth, ideology, and hegemony and engaged in professional critique, political and economic analysis, and sociological observation. The paradigm took institutional form in anthologies, new journals, and in the creation and rapid growth of a Journalism Studies Division in the International Communication Association (ICA).