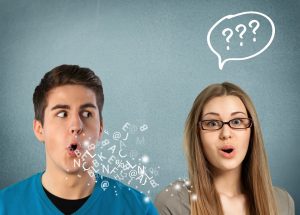 When individuals engage in social interaction with each other, they cannot be completely certain of their conversational partners’ current goals, emotional states, beliefs, attitudes, and future actions. Individuals also harbor uncertainties about how they should act toward their partners. These uncertainties are maximal when strangers meet, but uncertainties can also arise in close relationships of long duration. Uncertainty Reduction Theory (URT; Berger & Calabrese 1975) proposes that individuals must reduce their uncertainties to some degree in order to be able to fashion verbal discourse and actions that will allow them to achieve their interaction goals.

URT has found purchase in explaining social interaction in intercultural (Gudykunst 1995) and organizational (Kramer 2004) communication contexts. Individuals may experience uncertainty with respect to their relationships with each other, and individuals may not necessarily be motivated to reduce their uncertainty when they anticipate experiencing negative outcomes by so doing.

When individuals converse, they show strong proclivities to reciprocate each other’s verbal and nonverbal behaviors. Although the forces for reciprocity in social interaction are highly pervasive, there are conditions under which interacting individuals will show compensation in response to each other’s behaviors. Compensation occurs when a behavior displayed by one person is not matched in some way by another. A number of alternative theories have been devised to illuminate the conditions under which reciprocity and compensation are likely to occur, especially with respect to nonverbal behaviors. Although these theories differ in terms of their explanations for reciprocity/compensation, they share a common assumption that when expectations for nonverbal behavior are violated, individuals tend to experience arousal. Research comparing these theories has been inconclusive and has prompted the development of Interaction Adaptation Theory (Burgoon et al. 2010).

Just as language is a tool for attaining everyday goals, social interaction is an instrument for goal achievement. Consistent with this proposition, constructivist researchers have endeavored to determine the characteristics of messages deemed to be effective for achieving a variety of goals, most of them concerned with persuasion. A more comprehensive and abstract message production theory labeled Action Assembly Theory (Greene 1997) has been developed to explain how individuals produce actions and discourse. Theories featuring such knowledge structures as scripts and plans have also been devised (Berger 1997). According to these Goal- Plan-Action (GPA) theories (Dillard et al. 2002), scripts and plans are hierarchically organized knowledge structures representing action sequences that will bring about the achievement of goals. Once goals are activated, these knowledge structures guide actions toward goal attainment.

Interpersonal communication plays a critical role in the development, maintenance, and deterioration of social and personal relationships. A central question researchers have sought to answer is why some relationships become closer over time while others grow distant and perhaps end. Social exchange theories have frequently been invoked to explain why relationship growth and deterioration occur (Roloff 1981). These theories suggest that individuals experience both rewards for and costs of being in relationships with each other. Favorable relative reward/cost ratios fuel relationship growth, whereas unfavorable ratios are associated with relationship deterioration. Relational dialectics researchers contend that the development of relationships is fraught with dialectical tensions that may serve to pull individuals in opposite directions simultaneously (Baxter & Montgomery 1996). Because tensions between these polarities shift over time, relationships are in a constant state of flux.

Many interpersonal communication researchers recognize that deception is an integral part of social interaction. Many times ‘white lies’ are told to help co-interlocutors save face when potentially embarrassing circumstances arise in social situations. Two enduring questions concerning deceptive communication have attracted considerable research attention. One of these concerns the degree to which engaging in deception alters nonverbal behaviors; i.e. do truth tellers’ nonverbal behaviors differ systematically from those of individuals who are telling lies? Specific behaviors may be diagnostic of deceptive communication in specific individuals; however, no universal nonverbal indicator of deceptive communication has yet been identified. The second enduring question is the degree to which individuals are skilled at detecting deception. Research has shown that most individuals, including law-enforcement professionals, are not very adept at detecting deception.

Increasingly, social interaction is being accomplished through various communication technologies. These developments have prompted a concomitant increase in research aimed at understanding their potential individual and social effects. Research has sought to determine how computer-mediated communication (CMC) and face-to-face (FtF) interaction differ with respect the outcomes associated with their use (Walther 2010). Because text-based CMC filters out many nonverbal cues available to people engaged in FtF interactions, it is presumed that communication via textbased CMC is more task focused than is FtF communication. Although relatively cue-deprived, text-based CMC venues may be useful for initially encountering and screening potential friends and romantic partners, they apparently do not afford sufficient information for developing close relationships. Individuals who initially meet in the textbased CMC world usually elect to communicate with each other through other channels, e.g., phone and FtF encounters.