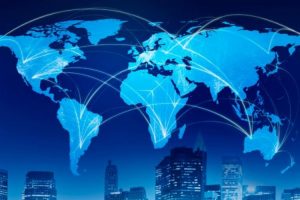 See our list of international communication research paper topics. The propaganda operations of the great powers in the 20th century – today often reframed as ‘soft power’ – mostly initiated interest in the field of international communication. Lasswell first addressed the propaganda issue early in the 1920s. The long Cold War entrenched this issue in government-funded research priorities. Then the preferred term was ‘psychological warfare,’ not ‘propaganda.’

Four Theories of the Press, by Siebert, Petersen and Schramm (1956), was the first major comparative media study. The theories in question were normative, the official views of media goals in four contrasting polities: authoritarian, libertarian, Soviet, and “social responsibility.” Comparative news studies have substantially revived recently.

Another major stimulus to research was ‘third world’ development, often framed at the time by the modernization’ schema which held that unless the west’s modernity spread, global raw materials and markets risked Soviet/Chinese takeover. Lerner’s book, The Passing of Traditional Society (1958) and Rogers’ Diffusion of Innovations (1962) were key texts.

Schiller’s series of studies of global media from 1969 onwards (e.g. Schiller 1991) challenged this schema. From the 1980s onwards, he argued emerging ICTs were being used to intensify transnational corporate hegemony. A second challenge came from Armand Mattelart (2000), who wrote on international advertising, international communication history, and multicultural policies, but paid more attention to cultural dynamics than Schiller.

‘Globalization’ could mean cultural imperialism, modernity, postmodernity, or even the ascendancy of free-market dogma. The roles of computer networks, satellites, and global media firms were plainly central, as were key world cities. Some found the term over-stated for the media and information sectors.

This scenario marks a sea change from some decades earlier, when cultural policies were often run by government ministries. All these companies are considerably smaller in financial terms than General Motors or ExxonMobil. Nonetheless, although media products are tradable commodities, their cultural impact cannot be assessed simply by the money spent on them.

In the years before and since World War II, the US government worked in a sustained manner to promote the ‘free flow of information policy’. This challenged British domination of ocean cable traffic and its Reuters news agency. Attempts to forge partly noncommercial global policies emerged in the 1970s NWICO debates (Many Voices, One World, 1980/2004, the MacBride Report), and the 2003 and 2005 World Summits on the Information Society (WSIS). The international Internet Governance Forum has emphasized ‘multi-stakeholderism’, i.e. the public, not just states and corporations, has a compelling interest in framing Internet policies.

Within the EU, France has actively supported exempting cultural products trade from WTO rules (the so-called ‘cultural exception’), while the UK has militantly supported the US. Canada and South Korea, amongst others, have supported France’s stance. Global media and information policy has been marked by clashing agendas.

The 1980 MacBride Report noted how most western news coverage (as now) emanated within the global north and reported on its doings. International news about the global south, when available at all, focused on disasters, natural or political. This made for a gravely under-informed planetary citizenry.

Given the increasing activity of global social movements of many kinds, it appears likely that nonhegemonic transnational media may become a growing force. The emergence of the Qatar-based news broadcaster Al-Jazeera is an example. It has challenged the deferential state broadcast news of the Arabic-speaking world, and influential US government definitions of Middle Eastern affairs.

Perhaps the successful anti-apartheid movement (1948–94), challenging the white-minority regime which ran South Africa during those decades, could be defined as the first major transnational media campaign. In a series of countries, independent media, campaigning mainstream journalists, ongoing demonstrations, university teach-ins, media smuggled into and out of South Africa, the African National Congress’s Zambia radio station, very effectively combined together over time.