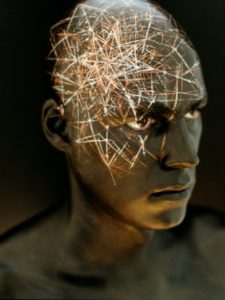 Biological anthropology focuses primarily on two types of questions, those relating to human paleontology and the emergence in the fossil record of prehumans, humans, and their near relatives; and those relating to the study of primates. This subfield, like most others within anthropology, converges in several places with the interests and goals of psychologists, especially those who are working within a Darwinian or neodarwinian paradigm. Compatible research agendas can be found in such areas as evolutionary psychology, the evolution of language, primate cognition, language learning in chimpanzees, and developmental comparisons between chimpanzees and young children.

The study of race, until the 1950S a third leg of biological anthropology, essentially disappeared within the subdiscipline as ongoing analyses revealed greater variation within than between breeding populations, significant intermixing of many breeding groups, and overlapping distributions of gene frequencies among groups so-named as the macroraces, Caucasoid, Mongoloid, and Negroid. But within psychology, the category of race tends to be used unquestioningly (see Publication Manual of the American Psychological Association. 4th ed ., Washington. D.C ., 1994), and nearly half of a sample of 600 specialists in intelligence testing expressed the belief that the Black-White IQ differential was attributable, at least in part, to genetic factors (Mark Snyderman and Stanley Rothman, “Survey of expert opinion on intelligence and aptitude testing.” American Psychologist, 1987, 42, 137-144).

In archaeology, focus on reconstruction of the customs of past peoples is supplemented by an interest in the processes involved in cultural change. Some of these processes appear to be related to organizational requirements; for example, the tendency for early city-states to exert political and military control over broad areas, with accompanying trade benefits, technological specialization, and social stability and stratification. But along with this adaptational emphasis, there has been a recent attempt to understand some of the characteristics of early Mexican civilization as a consequence of individual actions of forceful, charismatic leaders (Joyce Marcus and Kent V. Flannery, How Urban Society Evolved in Mexico’s Oaxaca Valley. New York. 1996). In this interpretation, the self-serving behavior of certain leaders, in trying to advance their positions, created changes ranging from the material to political power to ideologies that attributed a supernatural ancestry to them and subsequently to their descendants. Periods of relative stability would typically follow on the rapid changes instigated by these leaders. The similarity of stage sequences among ancient civilizations, and the possible contributions to that Similarity by individual motivational and cognitive factors, would seem to offer a challenge in which psychologists can usefully aid the efforts of archaeologists.

Linguistic anthropology and psychology are both closely allied with the discipline of linguistics, but at different points of contact. It is in the use of comparative language data that anthropology meets linguistics, and in neuroscience and related areas that psychology and linguistics find common ground. The arena of study for linguistic anthropology is natural languages-their phonological and grammatical structures, semantic systems, and contexts and uses. In psychology, occasional use of cross-language data is only found in the field of human development. Differences in approach between anthropology and psychology are seen in topics treated by both disciplines. In studies of language acquisition, anthropologists attend to the interaction between linguistic factors and the cultural context, whereas psychologists more often investigate the effects of intralinguistic factors like prosodic and phonological information. In studies of language use, anthropological questions revolve around issues such as linguistic relativity, language and ethnic/national borders, and religious or legal language, while those in psychology deal with problems like verbal learning and memory, comprehension of the sentence, and understanding of the written text. As the examples indicate, a molar-molecular distinction characterizes the differences in approach between the two fields.

Anthropology’s molar-level emphasis, reflecting its macro-order analyses and main concern with natural communities (or groups) rather than individuals, is all the more salient in the largest of the subdisciplines, sociocultural anthropology. Thus the typical themes and topics are institutional; for example, cities, consumption and commodities, colonialism, nongovernmental organizations (NGOs), and refugees and exile. Also included in this category are specialties like anthropology of education, economic anthropology, kinship, and medical anthropology. Despite long-term goals of comparison and generalization, the norm continues to be the case study-of a culture group, community, or subgroup. In recent decades, as remote sites have begun exhibiting the effects of significant contact with the urban-industrial world, and as research authorization has become problematic in many areas, sociocultural anthropologists have turned increasingly to the investigation of plural societies and complex urban groups, and to the study of businesspeople, physicists, street children, urban witches, and National Science Foundation panels. The preferred methodological stance remains that of the single investigator pursuing a problem by means of intensive fieldwork, but archival materials are widely used as well, and some researchers now employ systematic observations, tests, and instrumentation (e.g., assessment of energy expenditure with calorimeters. and of internal responses to social stimuli with measures of cardiovascular reactivity and salivary cortisol).

A schism exists between sociocultural anthropology’s positivist scientific branch, which tends to be generalizing and comparative, and its other major sections, which may be characterized as interpretive (usually particularistic. with emphasis on the cultural-historical context and the contingent status of knowledge) and advocative (emphasis on furthering of political agendas). Studies within a specialty like medical anthropology might produce the following varied angles of attack in the study of, say, nursing homes: for the scientific, how socioeconomic status (SES) and education may affect adaptation to a nursing-home regimen or how cultural values may affect the organization of nursing homes in different societies; for the interpretive, how patients’ personal narratives might yield rich raw materials for analysis, how the definition of the interviewer’s role might affect patients’ responses to questions. or how variables beyond SES and education might be brought to bear in understanding patients’ adjustments; for advocacy, how the treatment of those in nursing homes exemplifies our modern practice of everyday violence, of ” small wars” against the powerless, and how we must be sensitive to these capacities in ourselves and fight against them. These differing perspectives employ varied methodologies, and their viewpoints and outcomes, though not in principle incommensurable, are seldom synthesized.

Constructs like “identity,” “self-representation, ” and “personhood” abound within sociocultural anthropology generally, but such terms are typically applied to culture groups rather than to individuals. More familiar to psychologists would be the concepts and analyses used in the specialty labeled psychological anthropology, which in broadest form explores the relationships between psychological phenomena and their social and cultural contexts. Some of the primary theoretical orientations in psychological anthropology follow more or less closely on traditional perspectives in psychology, but others diverge radically and claim a central and essential place for cultural content and process in trying to account for psychological functioning. Among the former are general behavioral theory (including many standard conceptualizations from developmental and social psychology and personality theory) , cognitive anthropology, evolutionary thought, and psychoanalytic approaches; and among the latter are cultural psychology, the closely related activity theory, and ethnopsychology.

General behavioral theory research in psychological anthropology has primarily involved attempts to refine and extend hypotheses and formulations established in the European American tradition. This type of research marks the one orientation often devoted to sets of programmatic studies or to studies with multiple society samples. In socialization and child development, for example, comparative inquiries have assessed the variability of ecocultural niches and parents’ cultural belief systems, and have endeavored to measure their effects on child health and developmental outcomes. Others have looked for and found regularities mirroring results from Western research, such as the more frequent expression of aggression among boys than girls, or the behavioral and psychological effects on males of early father absence. In social-psychological inquiry, the consistent and pervasive in-group favoritism discovered in Western samples has been confirmed cross-culturally, and the frequently found two-dimensional structure of social behavior labeled “status/solidarity” has been shown cross-culturally in parallel form among personality trait descriptors. Cognitive approaches also have often meshed with Western psychological research, as in the finding that on a worldwide basis, difficult-to-learn “disjunctive” kin terminologies for siblings occur in only 2% of societies.

The evolutionary and psychoanalytic ideas pursued by psychological anthropologists (and by some psychologists) are largely outside the mainstream of psychological thought. A fundamental assumption in much psychological-evolutionary thinking is that specific traits and abilities reflect past not present adaptiveness, but that testable hypotheses can be constructed based on suppositions about early human adaptive problems. The resulting research questions relate to survival and reproduction issues, including genetic relatedness and preferential treatment, and differential male-female reproductive strategies. Although this research is usually well designed, and the findings consistent with hypotheses, often the same predictions could have been derived from other theoretical sources. A related area, biocultural inquiry, is interested in integration of physical and cultural dimensions, as in the consequences for child health of inevitable trade-offs between adult mating effort and parenting effort.

Psychoanalytic anthropology is wide ranging in its concerns: methodologically, in an argument for adoption of the “empathic method” in fieldwork, much as used in the clinical psychoanalytic interview; epistemically, in the claim that the anthropological material of description and interpretation is mutually constructed by psychoanalytic anthropologists and the people with whom they work; substantively. in the analysis of what are termed psychosocial adaptations (as in resolution of individual conflict by means of cultural institutions), or of Oedipal-type folktales, which are ubiquitous cross-culturally, yet appear in more disguised or repressed form in stratified societies than in simpler ones (Allen W. Johnson and Douglass Price-Williams. Oedipus Ubiquitous, Stanford. Calif. , 1996).

A more radical orientation like cultural psychology argues that mind is content driven, that mind is variable across cultures because cultural forms are variable, and that mind cannot be separated from its specific culture-historical determinants. Activity theory likewise rejects the notion of the psychic unity of humankind, but places less emphasis on analysis of “mental representations” as revealed in language and discourse, and more on the grounding of concepts, both psychological and cultural, in socially organized activities. Both cultural psychology and activity theory are built upon early theorizing by Lev Vygotsky. Alexander Luria, and other European psychologists who took as fundamental the proposition that mental activity is inspired by practical social activity. This approach has been used to study decision making and problem solving in natural settings and to analyze cognitive processes like memory.

The study of indigenous models of persons, selves, and experiences, ethnopsychology takes as problematic the Western psychology-based conceptions of these terms. It asserts, for example, that the concept of personality, so central to Western and social-scientific thought, is a culture-bound concept based in individual-centered theorizing, and that in some other societies the person descriptions refer almost entirely to interpersonal behavior. Similar arguments are made with respect to phenomena like emotions, the self, mental illness, and altered states of consciousness. Against these claims, there exists within psychological anthropology a set of counterpositions usually based upon the existence of human commonalities, that is, species-wide biopsychological regularities.

The Profession of Anthropology

As a profession, anthropology is relatively small, with the total number of active anthropologists worldwide at about 20.000, and more than half of them in the United States. During the second half of the twentieth century the profession grew markedly from tiny beginnings, and American academic programs in anthropology now turn out more than 400 Ph.D.s and 8 , 000 B.A. degrees annually compared with 22 and 352, respectively, in 1950. As with psychology, the majority of U.S. doctorates are now awarded to females (versus one third in the early 19 70s). Besides the gender shift, another important change in the profession is a movement away from the academic setting for employment. In the late 1990s, approximately one third of new U.S. Ph.D.s in anthropology took nonacademic jobs (in the private sector, government, museums, and research institutes), while in the 1970s only one eighth had done so.