View sample Stress and Cardiac Response Research Paper. Browse other  research paper examples and check the list of research paper topics for more inspiration. If you need a religion research paper written according to all the academic standards, you can always turn to our experienced writers for help. This is how your paper can get an A! Feel free to contact our custom writing services for professional assistance. We offer high-quality assignments for reasonable rates.

The origin of the concept of stress in health-related disciplines is closely linked to the idea that organisms react physiologically to the presence of danger or threat. This reactivity has a protective function since it provides the logistic and instrumental basis for adaptive behaviors such as ﬁght or ﬂight. However, if maintained for long periods, this protective or defensive reactivity may become a health risk, compromising the normal functioning of the organs involved. For many scientists the excessive physiological reactivity associated with stress is the main mechanism linking stress to illness.

The heart is a vital organ that reacts rapidly to physical and psychological demands. This reactivity is controlled by the central nervous system through neural and humoral pathways.

The neural pathway to the heart involves the two branches of the autonomic nervous system: the sympathetic and the parasympathetic. When the sympathetic nerves are activated, the heart rate accelerates and the heart contraction becomes stronger, resulting in a greater blood volume discharge and greater blood pressure in the vessels. When the parasympathetic nerves are activated, the heart rate decelerates, reducing the blood volume discharge and the blood pressure. The two branches can act reciprocally (one activated and the other inhibited), working in the same direction (increasing or decreasing the heart activity), or nonreciprocally (both activated or inhibited simultaneously), competing against each other for the ﬁnal cardiac outcome.

The humoral pathway involves the neural activation of the endocrine system, resulting in the secretion by the adrenal glands of various hormones into the bloodstream. One of these hormones, adrenaline, when it reaches the heart, has the same eﬀect as the sympathetic nerves: it increases the heart rate and the stroke volume. Other adrenal hormones, such as cortisol, facilitate the transfer of lipids and glucose into the bloodstream and also have an important indirect eﬀect on the heart and on the arteries that supply blood to the heart muscle: the coronaries. The humoral eﬀects on the heart are slower than the neural eﬀects but they last longer, contributing to maintaining cardiac reactivity during prolonged periods.

1.3.1 Hyper Ventilation. Hyperventilation is caused by rapid respiratory patterns provoking reduced carbon dioxide concentration in the blood. The cardiovascular response is a reduced blood ﬂow to the brain and heart arteries, and an increase in cardiac activity due to parasympathetic inhibition.

1.3.2 Respiratory Sinus Arrhythmia. In contrast, respiratory sinus arrhythmia is caused by slow and relaxed respiratory patterns. The consequence is a rhythmic deceleration of the heart rate, due to parasympathetic activation, coinciding with each expiratory cycle.

Cardiac defense can be deﬁned as the cardiac response to perceived danger or threat. The concept of defense has a long tradition in physiology and psychology and it is in this context that the concept of stress was ﬁrst introduced.

At the beginning of the twentieth century, Ivan Pavlov and other Russian reﬂexologists used the term defense reﬂex to refer to protective physiological responses elicited by noxious stimulation, such as hand withdrawal from an electric shock, eyeblink to a puﬀ of air, or vomit to bad food. A few years later, Walter Cannon used the term defense to refer to the ‘ﬁght or ﬂight’ response, a sympathetically mediated cardiovascular response to emergency situations aimed at providing energy supply to the body to facilitate adaptive behaviors such as attack (ﬁght) or escape (ﬂight). By the middle of the century and following Cannon’s ideas, Hans Selye had introduced the concept of stress and used the term ‘alarm’ response to refer to the ﬁrst stage of the physiological response to stressful situations.

There have been two major approaches to the study of cardiac defense: (a) the cognitive or sensory processing approach built on Pavlov’s distinction between orienting and defense reﬂexes, and (b) the motivational or emotional approach built on Cannon’s ideas on the ﬁght or ﬂight response.

2.2.1 The Cognitive Approach. The cognitive approach assumes that cardiac changes to environmental stimuli reﬂect attentional and perceptual mechanisms aimed at facilitating or inhibiting the processing of the stimuli (Sokolov 1963, Graham 1979). The orienting response (a deceleration of the heart rate to moderate or novel stimulation) facilitates attention and perception of the stimuli, whereas the defense response (an acceleration of the heart rate to intense or aversive stimulation) reduces attention and perception as a form of protection against the stimuli. To study cardiac defense, this approach has developed tasks that present discrete sensory stimuli, such as noise, light, pictures, or words, manipulating their physical features—intensity, duration, and rise time—or their aﬀective content—pleasant vs. unpleasant pictures or words. According to this approach, cardiac defense is characterized by a heart rate accelerative response, peaking between 3 and 6 s after stimulus onset, which habituates slowly with stimulus repetition.

To study cardiac defense, this approach has developed tasks that involve emotionally or cognitively challenging situations maintained throughout several minutes, such as keeping the hand in cold water, pressing a key as fast as possible to avoid shocks, or doing complex arithmetic tasks. The term ‘mental stress’ was introduced in this context to refer to tasks that require ‘mental eﬀort’ instead of ‘physical eﬀort.’ Under such conditions cardiac defense is characterized by a heart-rate acceleration maintained during the task duration, accompanied by reduced cardiac variability linked to hyperventilation and loss of respiratory sinus arrythmia.

3. A New Approach To Cardiac Defense

The cognitive and motivational approaches to cardiac defense have been diﬃcult to reconcile in the past. However, new data have been accumulated on defense responses, both in animals and humans, and on the neurophysiological brain circuits controlling such responses, which not only facilitate integration of the classic approaches but also have potential implications for the concept of stress and its relation to cardiovascular illness.

In natural settings, such as the imminence of a predator, the defense reaction is not a unique response that could be conceptualized as cognitive vs. motivational, or vice versa. Rather, the defense reaction follows a dynamic sequential process with initial phases in which attentional factors predominate, aimed at the detection and analysis of the potential danger, and if the process continues, later phases in which behavioral factors predominate, aimed at active defense such as ﬁght or ﬂight. This sequential process can be divided into three stages: pre-encounter, postencounter, and circa strike. Depending on the spatial and temporal proximity of the predator, diﬀerent components of the defense reaction may take place successively.

Motor startle and cardiac defense are two protective reﬂexes that have been extensively studied in recent years in relation to both cognitive and emotional modulatory factors. Startle is a whole-body motor ﬂexor response, including an eyeblink that is elicited by abrupt stimulation such as a brief, intense noise or light. Startle is augmented when the organism is in an aversive emotional state and inhibited when the organism is in a positive emotional state. Similarly, startle is potentiated in the ﬁrst stages of the natural defense reaction when attentional factors predominate, and inhibited during the later phases when behavioral factors predominate (Lang 1995).

On the other hand, studies on the cardiac components of the defense response to unexpected noises or shocks have questioned the classical models on response characteristics and their functional signiﬁcance (Vila 1995, Vila et al. 1997). The cardiac response to an unexpected noise is not only a heartrate acceleration. The response is a complex pattern of heart-rate changes, observed throughout the 80 s after stimulus onset, with two large accelerative and two smaller decelerative components in alternating order (see Fig. 1). The evocation of the response has both parasympathetic (ﬁrst acceleration and deceleration) and sympathetic (second acceleration and deceleration) inﬂuences. As regards its psychological signiﬁcance, contrary to the classical cognitive model, cardiac defense is accompanied by an increase in sensory processing (sensory intake). On the other hand, emotional factors are also involved, producing similar modulatory eﬀects as in motor startle. For example, phobic subjects presented with aversive noise while viewing pictures of their phobic object show a clear augmentation of the two accelerative components of the response. 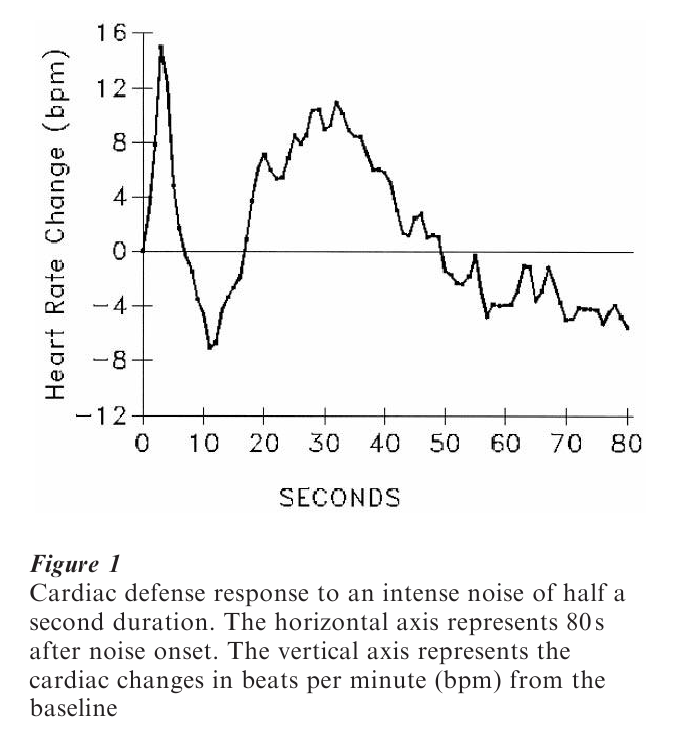 The above data support a description and interpretation of cardiac defense as a sequence of heart-rate changes with both accelerative and decelerative components, with both parasympathetic and sympathetic inﬂuences, and with both cognitive (attentional) and emotional (energetic) signiﬁcance. The structural foundation of this response is in the brain’s aversive motive system. What is known about this system comes from animal research, particularly from studies on defense reactions and fear conditioning (see LeDoux 1996 and Lang et al. 1997 for a comprehensive review). Neuroscientists have traced the chain of neural activation in the brain, starting from the sensory input, proceeding through the subcortical and cortical connecting structures, and ﬁnishing in the autonomic and motor eﬀectors. A critical structure in this circuit is the amygdala, a subcortical center located within the temporal lobes that receives inputs from the sensory thalamus and various cortical structures. Downstream from the amygdala, the defense circuit branches into diﬀerent structures, controlling separate forms of defense. This hierarchical organization, together with the learned plasticity in the anatomy and functioning of the brain’s structures, provides considerably variety in the pattern of defensive output. Depending on the situational context and on the weight of the local pathways within the circuit, the aversively motivated responses can be escape or avoidance, aggressive behavior, hormonal and autonomic responses, or the augmentation of motor startle.

The classical models of defense did not emphasize the dynamic character of the defense response—obvious in natural settings—and the simultaneous involvement of diﬀerent psychological processes—cognitive and motivational. The new model matches better the prevalent model of stress in health-related disciplines: the cognitive-transactional model. The continuous dynamic interaction between the situation and the person, leading to activation or deactivation of the stress response, is the main feature of the transactional model. In addition, the new approach to defense can help to understand the speciﬁc nature of stress, diﬀerentiating it from other related concepts such as anxiety or arousal. Based on the new defense model, stress can be deﬁned as the sustained activation of the brain’s defense motivational system. A state of maintained activation of this system implies a variety of speciﬁc defense responses being continuously elicited, including neural and humoral cardiovascular responses that correlate with poor cardiovascular health: maintained increases in heart rate, stroke volume and blood pressure, and maintained decreases in respiratory sinus arrhythmia and cardiac variability. These sustained responses are instrumental for the development of cardiovascular diseases such as essential hypertension and coronary heart disease.