View sample Signal Detection Theory Research Paper. Browse other  research paper examples and check the list of research paper topics for more inspiration. If you need a religion research paper written according to all the academic standards, you can always turn to our experienced writers for help. This is how your paper can get an A! Feel free to contact our custom writing services for professional assistance. We offer high-quality assignments for reasonable rates.

Signal detection theory (SDT) is a framework for interpreting data from experiments in which accuracy is measured. It was developed in a military context, then applied to sensory studies of auditory and visual detection, and is now widely used in cognitive science, diagnostic medicine, and many other ﬁelds. The key tenets of SDT are that the internal representations of stimulus events include variability, and that perception (in an experiment, or in everyday life) incorporates a decision process. The theory characterizes both the representation and the decision rule.

Consider an auditory experiment to determine the ability of a listener to detect a weak sound. On some trials, the sound is presented, and the listener is instructed to say ‘yes’ (I heard it) or ‘no’ (I did not hear it). On other trials, there is no sound, discouraging the observer from responding ‘yes’ indiscriminately. The presence of variability in sensory systems leads us to call these latter presentations noise (N ) trials, and the former signal plus noise (S + N ) trials. Responses of ‘yes’ on signal trials are called hits, and on no-signal trials are called false alarms. The observer’s performance can be summarized by a hit rate (here 0.84) and a false-alarm rate (here 0.30). 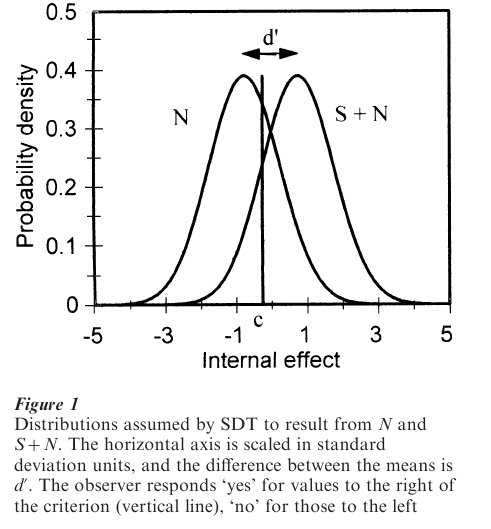 Figure 1 oﬀers natural interpretations of the sensitivity of the observer in the task and of the decision rule. Sensitivity, usually denoted d´, is reﬂected by the diﬀerence between the two distribution means; this characteristic of the representation is unaﬀected by the location of the criterion, and is thus free of response bias. The magnitude of d´ is found easily by computing the distances between each mean and the criterion, found in the last section:

Criterion location is one natural measure of response bias. If evaluated relative to the point at which the two distributions cross, it can be calculated by a formula analogous to Eqn. 1:

In the example above

that is, the criterion is slightly to the left of the crossover point, as in fact is shown in Fig. 1.

If sensitivity truly is unaﬀected by the location of the response criterion, then a shift in that criterion should leave d unchanged. An observer’s decision rule can be manipulated between experimental runs through instructions or payoﬀs. In the more eﬃcient rating method, a rating response is required; the analysis assumes that each distinct rating corresponds to a diﬀerent region along the axis of Fig. 1, and that each region is deﬁned by a diﬀerent criterion. The data are analyzed by calculating a hit and false-alarm rate for each criterion separately. A plot of hit rate vs. false alarm rate is called a receiver-operating characteristic, or ROC; the ROC that would be produced from the representation in Fig. 1 is shown in Fig. 2. Points at the lower end of the curve correspond to high criteria, and the curve is traced out from left to right as the criterion moves from right to left in Fig. 1. 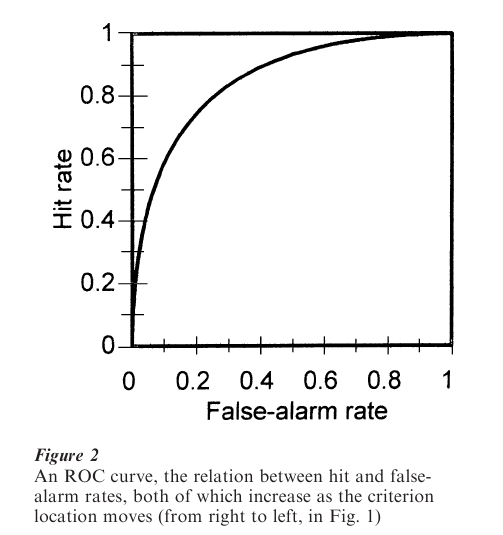 The shape of the ROC is determined by the form of the distributions in the representation, and data largely support the normality assumption. However, the assumption that the S + N and N distributions have the same variance is often incorrect (Swets 1986). In such cases, the area under the ROC is a good measure of accuracy (Swets and Pickett 1982); this index ranges from 0.5 for chance performance to 1.0 for perfect discrimination. An entire ROC (from a rating experiment, for example) is needed to estimate this area.

The essence of signal detection theory is the distinction between the representation and the decision rule, not the shape of the underlying distributions, and two types of nonnormal distributions have been important. One such distribution is the logistic, which has a shape very similar to the normal but is computationally more tractable. Logistic models have been used for complex experimental designs, and for statistical analysis. Another family of distributions, whose shape is rectangular, leads to rectilinear ROCs and can be interpreted as support for ‘thresholds’ that divide discrete perceptual states. Such curves are unusual, experimentally, but have been found in studies of recognition memory (Yonelinas and Jacoby 1994). Models using threshold assumptions have been developed for complex experimental situations, such as source monitoring in memory; in this context, they are called multinomial models.

5. Identiﬁcation And Classiﬁcation Along A Single Dimension

Detection theory is extended easily to experiments with multiple stimuli diﬀering on a single dimension. For example, a set of tones diﬀering only in intensity may be presented one at a time for identiﬁcation (the observer must identify the exact stimulus presented) or classiﬁcation (the observer must sort the set into two or more categories). The representation is assumed to be a set of distributions along a decision axis, with m 1 criteria used to assign responses to m categories.

SDT analysis allows the calculation of d´ (or a related measure, if equal variances are not assumed) for any stimulus pair, and an interesting question concerns the relation between this value and that found in a discrimination task using just those two stimuli. According to a theory of Braida and Durlach (1988), identiﬁcation d will be lower than discrimination d´ by an amount that reﬂects memory constraints in the former task. The predicted relation is qualitatively correct for many stimulus dimensions, and can be quantitatively predicted for tones diﬀering in intensity.

The one-interval design for measuring discrimination is appropriate for some applications (it seems quite natural in recognition memory, for example, where the S N trials are studied items and the N trials are foils), but other methods are often preferred. One popular technique is two-alternative forced-choice (2AFC), in which both stimuli are presented on every trial and the observer must say whether N or S + N occurred ﬁrst. Another method is same-diﬀerent, in which there are again two intervals, but each interval can contain either of the two stimuli and the observer must say whether the two stimuli are the same or diﬀerent.

These and many other designs can be analyzed by assuming that each interval is represented by a value on a separate, independent perceptual dimension. Although d is a characteristic of the stimuli and the observer, and therefore constant across paradigms, performance as measured by percent correct [ p(c)] varies widely (Macmillan and Creelman 1991). For example, Sect. 2 showed that if d´ = 1.5, p(c) = 0.77 in the one-interval task; but in 2AFC the same observer would be expected to score p(c) = 0.86, and in the same-diﬀerent task as low as p(c) = 0.61. The relation between one-interval and 2AFC was one of the ﬁrst predictions of SDT to be tested (Green and Swets 1966), whereas that between same-diﬀerent and other paradigms is a more recent topic of investigation. An interesting aspect of same-diﬀerent performance is that two distinct decision strategies are available, and their use depends on aspects of the experimental design and stimulus set (Irwin and Francis 1995)

Many identiﬁcation and classiﬁcation experiments use stimulus sets that themselves vary in multiple dimensions perceptually, and SDT analysis can be extended to this more general case. Multidimensional detection theory has been particularly helpful in clarifying questions about independence (see Ashby 1992).

Detection theory has provided a forum for asking a slate of questions about the optimality of performance. One set of issues concerns the degree to which human behavior falls below the ideal level set by stimulus variability. Early auditory experiments using external noise revealed that human ‘eﬃciency’ was often quite high, though never perfect. A diﬀerent type of application concerns the theoretical prediction of the ratio between the S + N and N standard deviations, which can be derived from the shape of the ROC shape. For example, this ratio should be less than unity for detection experiments in which signal parameters are not known by the observer (Graham 1989). Ratcliﬀ et al. (1994) showed that for an important class of recognition memory models, the ratio should be approximately 0.8, as it is empirically.

Some strong assumptions about the decision process that is at the heart of SDT have been tested. In general, these are well supported for one-dimensional representations, but complications sometimes arise for higher dimensionality. Do observers establish ﬁxed criteria? Experiments requiring discrimination between distributions of stimuli have shown that they do when the variability is in one dimension and with adequate experience in two dimensions as well. Do observers set ‘optimal’ criteria? Actual criterion settings are often conservative compared to ideal ones predicted by Bayes’s Theorem. In a multidimensional task, observers appear to adopt appropriate decision boundaries when those are simple in form (e.g., linear), but fall short of optimality when more complex rules are required. Does the representation remain ﬁxed in the face of task variation? In one dimension, this amounts to the original, often-replicated datum that d´ (or some sensitivity measure) is unchanged when criterion changes. In more than one dimension, attentional eﬀects can alter the representation (Nosofsky 1986), and the question of what is invariant in these cases is still unresolved.