View sample Sex Hormones And Their Brain Receptors Research Paper. Browse other  research paper examples and check the list of research paper topics for more inspiration. If you need a religion research paper written according to all the academic standards, you can always turn to our experienced writers for help. This is how your paper can get an A! Feel free to contact our custom writing services for professional assistance. We offer high-quality assignments for reasonable rates.

Nerve cells react not only to electrical and chemical signals from other neurons, but also to a variety of steroid factors arising from outside the brain. Steroids, particularly gonadal steroids, have profound eﬀects on brain development, sexual diﬀerentiation, central nervous control of puberty, the stress response, and many functions in the mature brain including cognition and memory (Brinton 1998, McEwen 1997).

The brain contains receptors for all ﬁve classes of steroid hormones: estrogens, progestins, androgens, glucocorticoids, and mineralocorticoids. Steroid hormone receptors are not uniformly distributed, but occupy speciﬁc loci within the brain (McEwen 1999, Shughrue et al. 1997). As expected the hypothalamus has a rich abundance of steroid receptors, particularly receptors for the sex hormones estrogen, progesterone, and testosterone. Remarkably, the limbic system is also a site for steroid action and contains estrogen, androgen, and glucocorticoid receptors. The cerebral cortex is also a site of steroid action and expresses receptors for estrogens and glucocorticoids. Some of these receptors arise from separate genes while others arise from alternative splicing of a single gene. For example the progesterone receptor exists in multiple isoforms derived from the alternative splicing of one gene (Whitﬁeld et al. 1999) whereas estrogen receptors have multiple receptor subtypes (ERα and ERβ) that originate from separate genes, as well as multiple isoforms (Warner et al. 1999, Keightley 1998).

All genomic steroid hormone receptors are composed of at least three domains: the N-terminal (or A B) region, the DNA binding domain containing two zincﬁngers (region C), and the ligand-binding domain to which the hormone binds (region E). Select steroid receptors, such as the estrogen receptors, have an additional C-terminal (or F) region, which serves to modify receptor function (Tsai and O’Malley 1994, Warner et al. 1999) (Fig. 1A). 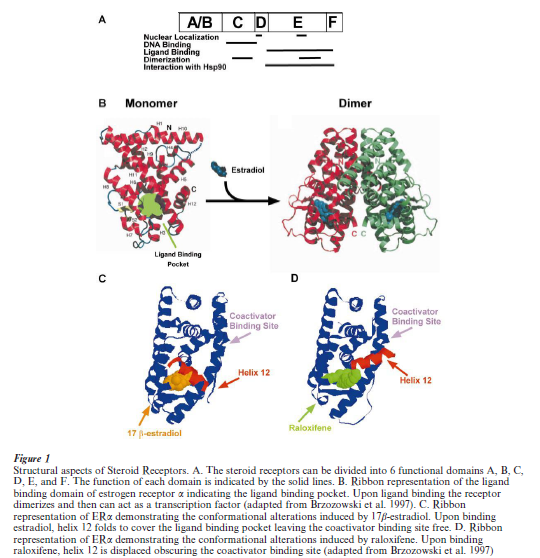 The amino-terminal A/B region of steroid receptors is highly variable and contains a transactivation domain, which interacts with components of the core transcriptional complex. Region C of these receptors contains a core sequence of 66 amino acids that is the most highly conserved region of the nuclear hormone receptor family. This region folds into two structures that bind zinc in a way characteristic of type II zinc ﬁngers. These two type II zinc clusters are believed to be involved in speciﬁc DNA binding, thus giving the C regions its designation as the DNA binding domain. In addition, the C region plays a role in receptor dimerization (Fig. 1A and B). The D region contains a hinge portion that may be conformationally altered upon ligand binding. The E/F-region is functionally complex since it contains regions important for ligand binding and receptor dimerization, nuclear localization, and interactions with transcriptional co-activators and corepressors (Horwitz et al. 1996). It has been observed that a truncated receptor lacking regions A/B and C can bind hormone with an aﬃnity similar to that of the complete receptor suggesting that region E is an independently folded structural domain. Amino acids within region E that are conserved amongst all members of the nuclear receptor family are thought to be responsible for the conformation of a hydrophobic pocket necessary for steroid binding whereas the non-conserved amino acids may be important for ligand speciﬁcity. The conserved amino acid sequences within the ligand binding domain of the nuclear receptors make up a common structural motif, which is composed of 11–12 individual α helices with helix 12 being absent in some members of the superfamily of steroid receptors. Although domain F is not required for transcriptional response to hormone, it appears to be important for modulating receptor function in response to diﬀerent ligands.

Of prime importance in estrogen receptor function is helix 12 (Fig. 1C), found in the most carboxyl region of the ligand-binding domain, which is thought to be responsible for transcriptional activation function (AF-2) activity (Warner et al. 1999). This region realigns over the ligand-binding pocket when associated with agonists, but takes on a diﬀerent conformation with antagonists (Fig. 1). Such conformational changes are thought to aﬀect interactions with coactivators, since helix 12 is required for interaction with several of the coactivator proteins and mutations that are known to abolish AF-2 transcriptional activity also abolish the interaction of the nuclear receptors with several of their associated proteins (McKenna et al. 1999, Warner et al. 1999). The ability of diﬀerent ligands to determine the conformational state of the receptor has profound consequences on the ability of the steroid receptor to drive gene transcription.

Classically, sex steroids exert their eﬀects by binding to intracellular receptors and modifying gene expression (Tsai and O’Malley 1994). Steroid receptors are ligand-activated transcription factors that modulate speciﬁc gene expression. In the presence of hormone, two receptor monomers dimerize and bind to short DNA sequences located in the vicinity of hormone-regulated genes (Fig. 2). These speciﬁc DNA sequences, or hormone response elements (HRE), contain palindromic or directly repeating half-sites (Tsai and O’Malley 1994). Since an HRE exerts its action irrespective of its orientation and when positioned at a variable distance upstream or downstream from a variety of promoters (Tsai and O’Malley 1994), it is an enhancer. Steroid receptors represent inducible enhancer factors that contain regions important for hormone binding, HRE recognition, and activation of transcription. 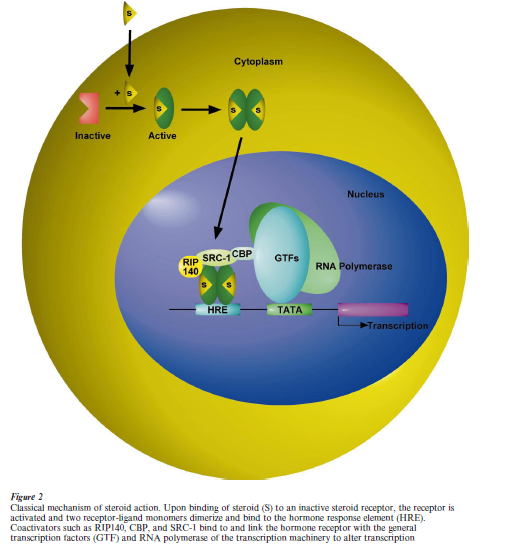 The mechanism of transactivation by nuclear receptors has recently achieved further complexity by the discovery of an increasing number of coregulators. Coregulator proteins can modulate the eﬃcacy and direction of steroid-induced gene transcription. Coregulators include coactivators ERAP160 and 140, and RIP160, 140, and 80 which were biochemically identiﬁed by their ability to speciﬁcally interact with the hormone binding domain of the receptor in a ligand-dependent manner (McKenna et al. 1999) (Fig. 2). For example, the interaction between estrogen receptors and coregulators was promoted by estradiol whereas antiestrogens did not promote this inter- action. Further studies led to the identiﬁcation of many other co-activators including glucocorticoid receptor interacting protein 1 (GRIP 1), steroid receptor coactivator 1 (SRC 1), and transcriptional intermediary factor 2 (TIF 2). When cotransfected with nuclear receptors, including estrogen receptor, these coactivators are capable of augmenting ligand- dependent transactivation. In addition, the phospho- CREB-binding protein (CBP) and the related p300 have been demonstrated to be estrogen receptor associated proteins and involved in ligand-dependent transactivation. It has also been shown that coactivator RIP140 interacts with the ER in the presence of estrogen, and this interaction enhances transcriptional activity between 4to 100-fold, depending on promoter context.

Although steroids induce many of their eﬀects in the brain through activation of genomic receptors, nontranscriptional actions of estrogens, progestins, glucocorticoids, and aldosterone have been observed in a variety of tissues, including the brain (Brinton 1993, 1994, Watson et al. 1995, Pappas et al. 1995). These nontranscriptional actions are characterized by short-term eﬀects that range from milliseconds to several minutes. Additionally, these eﬀects still occur in the presence of actinomycin D or cyclohexamide, known transcriptional blockers. The ﬁrst suggestion of the non-transcriptional actions of steroids came when it was observed that progesterone induced rapid anesthetic and sedative actions when injected subcutaneously (Brinton 1994). Then in the 1960s and 1970s numerous studies suggested that estrogen modulated the electrical activity of a variety of nerve cells (Foy et al. 1999). Subsequent studies utilizing various techniques and preparations have shown that these eﬀects occur too rapidly to be genomic in nature (Foy and Teyler 1983).

Morphological studies of neuronal development conducted in vitro have shown that estrogenic steroids exert a growth-promoting, neurotrophic eﬀect on hippocampal and cortical neurons via a mechanism that requires activation of NMDA receptors (Brinton et al. 1997). In vivo studies have revealed a proliferation of dendritic spines following 17β-estradiol treatment that can be prevented by blockade of NMDA receptorchannels, though not by AMPA or muscarinic receptor antagonists (Woolley 1999). Other reports have provided evidence that chronic 17β-estradiol treatment increases the number of NMDA receptor binding sites, and NMDA receptor-mediated responses (Woolley 1999).

Recent studies suggest a direct link between the estrogen receptor and the mitogen-activated protein kinase (MAPK) signaling cascade (Singh et al. 2000). MAPKs are a family of serine-threonine kinases that become phosphorylated and activated in response to a variety of cell growth signals. In neuronal cells, estrogen resulted in neuroprotection that was associated with a rapid activation of the MAPK signaling pathway (Singh et al. 2000). These neuroprotective eﬀects, which occurred within 5 minutes of estrogen exposure are thought to occur through the transient activation of c-src-tyrosine kinases and tyrosine phosphorylation of p21(ras)-guanine nucleotide activating protein (Fig. 3). Additionally, the potentiation of the NMDA receptor mediated neuronal response by estrogen is thought to be mediated by c-src-tyrosine kinases (Bi et al. 2000). It is not yet clear whether these eﬀects require the classical estrogen receptor (ERα β) or if there is an as of yet undiscovered membrane receptor that mediates these rapid eﬀects of estrogen (Razandi et al. 1999). Thus, while steroid receptors are ligand-induced transcriptional enhancers, they are also activators of intracellular signaling pathways that can profoundly inﬂuence neuronal function and survival. 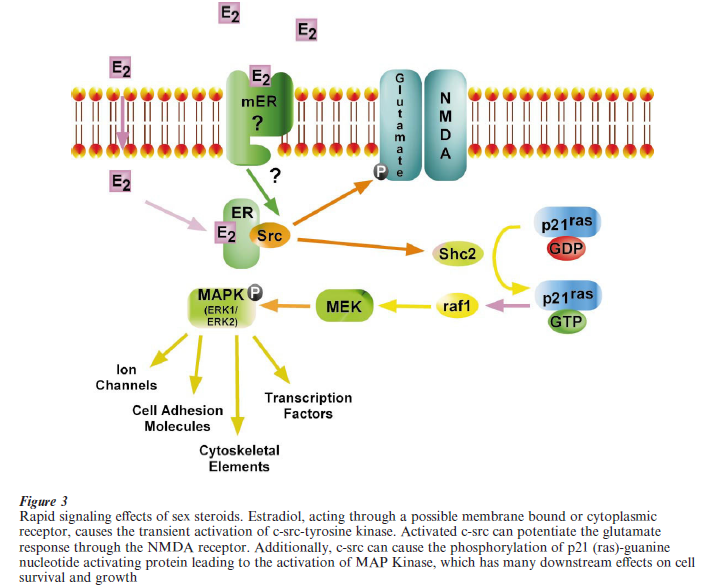 Challenges remain in our understanding of steroid action and sites of action in brain. Remarkably, our knowledge of genomic sites of steroid action has greatly expanded in the past decade while the membrane sites of steroid action remain a challenge to fully characterize. Our understanding of steroid eﬀects in brain has led to the expansion of the role of steroid receptors beyond sexual diﬀerentiation and reproductive neuroendrocrine function to regulators of nearly every aspect of brain function including cognition. The full range of mechanisms by which steroids inﬂuence such a wide array of brain functions remains to be discovered.