View sample School Achievement Research Paper. Browse other  research paper examples and check the list of research paper topics for more inspiration. If you need a religion research paper written according to all the academic standards, you can always turn to our experienced writers for help. This is how your paper can get an A! Feel free to contact our research paper writing service for professional assistance. We offer high-quality assignments for reasonable rates.

Although the analysis of school achievement (SA)—its structure, determinants, correlates, and consequences—has always been a major issue of educational psychology, interest in achievement as a central outcome of schooling has considerably increased during the last decade. In particular, large-scale projects like TIMSS (Third International Mathematics and Science Study) (Beaton et al. 1996) had a strong and enduring impact on educational policy as well as on educational research and have also raised the public interest in scholastic achievement.

1. School Achievement And Its Determinants: An Overview

SA can be characterized as cognitive learning outcomes which are products of instruction or aimed at by instruction within a school context. Cognitive outcomes mainly comprise procedural and declarative knowledge but also problem-solving skills and strategies. The following facets, features, and dimensions of SA, most of which are self-explaining, can be distinguished:

(a) episodic vs. cumulative;

(c) referring to diﬀerent parts of a given subject (in a foreign language e.g., spelling, reading, writing, communicating, or from the competency perspective, grammatical, lexical, phonological, and orthographical);

(f) actual versus potential (what one could achieve, given optimal support); 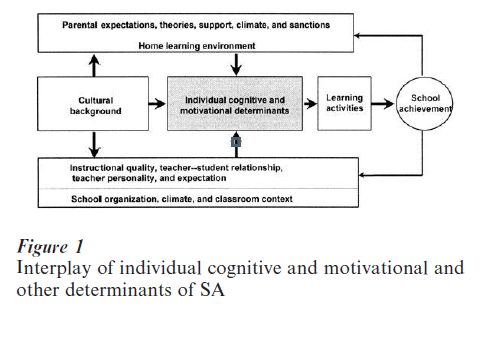 Intelligence is certainly one of the most important determinants of SA. Most deﬁnitions of intelligence refer to abstract thinking, ability to learn, and problem solving, and emphasize the ability to adapt to novel situations and tasks. There are diﬀerent theoretical perspectives, for example Piagetian and neo-Piagetian approaches, information-processing approaches, component models, contextual approaches, and newer integrative conceptions such as Sternberg’s triarchic theory of intelligence, or Gardner’s model of multiple intelligences. Among them, the traditional psychometric approach is the basis for the study of individual diﬀerences. In this approach quantitative test scores are analyzed by statistical methods such as factor analysis to identify dimensions or factors underlying test performance (Sternberg and Kaufman 1998). Several factor theories have been proposed ranging from a general-factor model to various multiple-factor models. One of the most signiﬁcant contributions has been a hierarchical model based on second-order factors that distinguishes between ﬂuid and crystallized abilities. Fluid intelligence refers to basic knowledge-free information-processing capacity such as detecting relations within ﬁgural material, whereas crystallized intelligence reﬂects inﬂuences of acculturation such as verbal knowledge and learned strategies. Fluid and crystallized abilities can both be seen as representing general intelligence as some versions of a complete hierarchical model would suggest (see Gustafsson and Undheim 1996).

Substantial correlations (the size of the correlations diﬀer from r = 0.50 to r = 0.60) between general intelligence and SA have been reported in many studies. That is, more than 25 percent of variance in post-test scores are accounted for by intelligence, depending on student age, achievement criteria, or time interval between measurement of intelligence and SA. General intelligence, especially ﬂuid reasoning abilities, can be seen as a measure of ﬂexible adaptation of strategies in novel situations and complex tasks which put heavy demands and processing loads on problem solvers.

Intelligence is related to quality of instruction. Low instructional quality forces students to ﬁll in gaps for themselves, detect relations, infer key concepts, and develop their own strategies. On the whole, more intelligent students are able to recognize solutionrelevant rules and to solve problems more quickly and more eﬃciently. Additionally, it is just that ability that helps them to acquire a rich knowledge base which is ‘more intelligently’ organized and more ﬂexibly utilizable and so has an important impact on following learning processes. Accordingly, intelligence is often more or less equated with learning ability (see Gustafsson and Undheim 1996).

Beyond general intelligence, speciﬁc cognitive abilities do not seem to have much diﬀerential predictive power, although there is occasional evidence for a separate contribution of speciﬁc abilities (Gustafsson and Undheim 1996). In Gardner’s theory of multiple intelligences there are seven abilities (logicalmathematical, linguistic, spatial, musical, bodilykinesthetic, interpersonal, and intrapersonal intelligence). Among domain-speciﬁc abilities, reading ability that is related to linguistic intelligence in Gardner’s model, has some special signiﬁcance. Speciﬁc abilities such as phonological awareness have turned out as early predictors of reading achievement.

Styles refer to characteristic modes of thinking that develop in combination with personality factors. While general cognitive or information-processing styles are important constructs within diﬀerential psychology, learning styles are considered as determinants of SA. Learning styles are general approaches toward learning; they represent combinations of broad motivational orientations and preferences for strategic processing in learning. Prominent learning style conceptions mainly diﬀer with respect to intrinsic and extrinsic goal orientations and surface processing vs. deep processing. Intrinsic vs. extrinsic motivation deals with whether task fulﬁllment is a goal of its own or a means for superordinate goals. In deep processing, learners try to reach a comprehension of tasks as complete as possible to incorporate their representations into their own knowledge structures and give them personal signiﬁcance. In surface processing, learners conﬁne processing to the point where they can reproduce the material in an examination or achievement situation as well as possible (Snow et al. 1996).

Besides motivational and metacognitive factors, epistemological beliefs are important determinants for learning strategies and achievement. They refer to beliefs about the nature of knowledge and learning such as: knowledge acquisition depends on innate abilities, knowledge is simple and unambiguous, and learning is quick. Epistemological beliefs can inﬂuence quality of achievement and persistence on diﬃcult tasks (Schommer 1994).

But learning is not only hindered by a lack of prior knowledge, but also by misconceptions many learners have acquired in their interactions with everyday problems. For example, students often have naïve convictions about physical phenomena that contradict fundamental principles like conservation of motion. These misconceptions, which are deeply rooted in people’s naive views of the world, often are in conﬂict with new knowledge to be acquired by instruction. To prevent and overcome these conﬂicts and to initiate processes of conceptual change is an important challenge for classroom instruction.

The self-concept of ability (largely equivalent with subjective competence, achievement-related self-conﬁdence, expectation of success, self-eﬃcacy; see Self-concepts: Educational Aspects; Self-eﬃcacy: Educational Aspects) represents the expectancy component within the framework of an expectancy x value approach, according to which subjective competence (expectancy aspect) and subjective importance (value aspect) are central components of motivation. Substantial correlations between self-concept of ability and SA have been found. Correlations are the higher, the more domain-speciﬁc the self-concept of ability is conceptualized, the higher it is, and the older the pupils are. Self-concept of ability is negatively related to test anxiety and inﬂuences scholastic performance by means of various mechanisms: Students with a high self-concept of ability (a) initiate learning activities more easily and quickly and tend less to procrastination behavior, (b) are more apt to continue learning and achievement activities in diﬃcult situations (e.g., when a task is unexpectedly diﬃcult), (c) show more persistence, (d) are better protected against interfering cognitions such as self-doubt and other worries (Helmke and Weinert 1997).

3.2 Attitude Towards Learning, Motivation To Learn, And Learning Interest

There are several strongly interrelated concepts that are associated with the subjective value—of the domain or subject under consideration, of the respective activities, or on a more generalized level, of teachers and school. The value can refer to the aﬀective aspect of an attitude, to subjective utility, relevance, or salience. In particular, attitude toward learning means the aﬀective (negative or positive) aspect of the orientation towards learning; interest is a central element of self-determined action and a component of intrinsic motivation, and motivation to learn comprises subjective expectations as well as incentive values (besides anticipated consequences like pride, sorrow, shame, or reactions of signiﬁcant others, the incentive of learning action itself, i.e., interest in activity). Correlations between SA and those constructs are found to be positive but not very strong (the most powerful is interest with correlations in the range of r 0.40). These modest relations indicate that the causal path from interest, etc. to SA is far and complex and that various mediation processes and context variables must be taken into account (Helmke and Weinert 1997).

Motivation is a necessary but often not suﬃcient condition for the initiation of learning and for SA. To understand why some people—in spite of suﬃcient motivation—fail to transform their learning intentions into correspondent learning behavior, volitional concepts have proven to be helpful. Recent research on volition has focused on forms of action control, especially the ability to protect learning intentions against competitive tendencies, using concepts like ‘action vs. state orientation’ (Kuhl 1992). The few empirical studies that have correlated volitional factors with SA demonstrate a nonuniform picture with predominantly low correlations. This might be due to the fact that these variables are primarily signiﬁcant for self-regulated learning and less important in the typical school setting, where learning activities and goals are (at least for younger pupils) strongly prestructured and controlled by the teacher (Corno and Snow 1986). Apart from that there certainly cannot be expected any simple, direct, linear correlations between volitional characteristics and SA, but complex interactions and manifold possibilities of mutual compensation, e.g., of ineﬃcient learning strategies by increased eﬀort.

In Fig. 1 only single determinants and ‘main’ eﬀects of cognitive and motivational determinants on SA were considered. Actually, complex interactions and context speciﬁcity as well as the dynamic interplay between variables have to be taken into account. The following points appear important:

(a) Interactions among various individual determinants. For example, maximum performance necessarily requires high degrees of both intelligence and of eﬀort, whereas in the zone of normal average achievement, lack of intelligence can be compensated (as long as it does not drop below a critical threshold value) by increased eﬀort (and vice versa).

(b) Aptitude x treatment interactions and classroom context. Whether test anxiety exerts a strong negative or a low negative impact on SA depends on aspects of the classroom context and on the characteristics of instruction. For example, high test-anxious pupils appear to proﬁt from a high degree of structuring and suﬀer from a too open, unstructured learning atmosphere, whereas the reverse is true for self-conﬁdent pupils with a solid base of prior knowledge (Corno and Snow 1986). Research has shown a large variation between classrooms, concerning the relation between anxiety and achievement as well as between intelligence and achievement (Helmke and Weinert 1999). A similar process of functional compensation has been demonstrated for self-concept (Weinert and Helmke 1987).

(c) Culture speciﬁcity. Whereas the patterns and mechanisms of basic cognitive processes that are crucial for learning and achievement are probably universal, many relations shown in Fig. 1 depend on cultural background. For example, the ‘Chinese learner’ does not only show (in the average) a higher level of eﬀort, but the functional role of cognitive processes such as rehearsal is diﬀerent from the equivalent processes of Western students (Watkins and Biggs 1996).

(d) Dynamic interplay. There is a dynamic interplay between SA and its individual motivational determinants: SA is aﬀected by motivation, e.g., self- concept, and aﬀects motivation itself. From this perspective, SA and its determinants change their states as independent and dependent variables. The degree to which the mutual impact (reciprocity) of academic self-concept and SA is balanced has been the issue of controversy (skill development vs. self- enhancement approach).