View sample Neural Basis of Working Memory Research Paper. Browse other  research paper examples and check the list of research paper topics for more inspiration. If you need a religion research paper written according to all the academic standards, you can always turn to our experienced writers for help. This is how your paper can get an A! Feel free to contact our custom writing service for professional assistance. We offer high-quality assignments for reasonable rates.

In experimental  psychology, the term ‘working memory’ has been used to refer to the temporary storage of information that is necessary for cognitive processing underlying  the  comprehension and  learning  of new material, reasoning, mental arithmetic, etc. This theoretical  construct  emerged  in the  1970s out  of earlier experimental  behavioral  work on short-term memory (see Baddeley 1986 for a review). The term  working memory has been deﬁned variously to refer not only to the transient maintenance of information but also to its processing. For  instance,  one of the most popular working memory models in cognitive psychology assumes  the  existence  of a central  executive  system supplemented by ‘slave’ systems that  are specialized for  the  maintenance and  processing  of  verbal  and visual material (see Baddeley 1986). Such an expanded concept  of a working  memory  system becomes  tantamount to the entire neural processing of information that  occupies current  awareness.  Naturally, any system deﬁned so broadly will be the result of processing in multiple areas of the brain. This article will focus on research  that   aims  to  identify  the  role  of  several cortical  structures  in what  has been termed  working memory at the cognitive level of analysis.

1.    The Frontal Cortex And Working Memory

There is considerable  evidence that the frontal  cortex plays a major  role in working  memory  although its precise role remains  a matter  of debate.  The frontal cortex  occupies  a  very  large  area  of  the  primate cerebral cortex. Its posterior  part,  which lies immediately in front of the central sulcus, consists of the motor and premotor cortex (see Fig. 1). The vast area that  lies further  forward  is often  referred  to  as the ‘prefrontal’   cortex.   The  prefrontal  cortex   has  expanded  enormously  in the  primate  brain  and  comprises many distinct areas. These areas differ in terms of their cytoarchitecture (i.e., the arrangement of the neurons within them) and have their own distinct connections  with other parts of the brain (Pandya and Yeterian   1985).  These  anatomical facts  imply  that there must be some differences in the local neuronal computations occurring  within particular areas since both the local circuitry and the inputs and outputs  are distinct.

The ﬁrst evidence that suggested that the prefrontal cortex  plays a major  role in working  memory  came from work in the 1930s by Jacobsen  and co-workers who  examined  the  performance  of  monkeys   with lesions  restricted   to  the  prefrontal  cortex   on  the delayed response task (Jacobsen 1936). This work showed that frontal cortical damage rendered animals incapable  of  performing   the  delayed  response  task which  was  introduced by  Hunter in  1913 to  study transient memory  in animals.  This  task  typically  is conducted  in the following manner. The experimenter attracts the monkey’s attention and, in full view of the animal, a reward (i.e., a piece of food) is placed under one of two identical stimuli (e.g., cups, plaques, etc.). The stimuli are then hidden from the animal’s view by an opaque  screen and, after a delay of a few seconds, the screen is raised and the animal is allowed to choose one  of  the  two  stimuli  to  obtain  the  reward  if, of course, the choice is correct.  In interpreting the impairment on  delayed  response  by  monkeys  with frontal cortical damage, Jacobsen (1936, p. 52) argued that  the  behavior  of such  animals  ‘instead  of being directed by a balance of immediate, recent and temporally  remote stimulation, is dominated by present  external   stimuli  and   the  stable  habit   systems derived from earlier training;  the mnemonic inﬂuence of past experience is lacking.’ 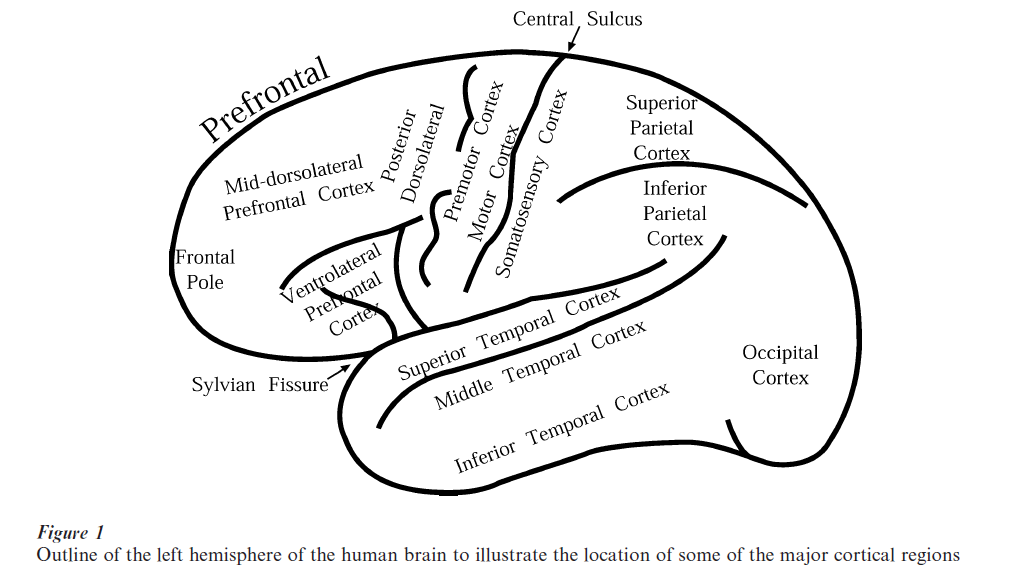 The demonstration that  adequate  performance of the delayed response and related tasks is severely impaired  by lesions of the prefrontal cortex has been the starting  point  of a large amount  of experimental work  on  its possible  role  in working  memory.  The lesion  investigated  in Jacobsen’s  work  involved  the entire prefrontal cortex. Subsequent  work in the monkey  by  Pribram, Mishkin,   Gross,  Weiskrantz,   and others showed that the lateral surface of the prefrontal cortex was critical for delayed response performance. Furthermore, the deﬁcit on the spatial version of the task  was  localized  around the  sulcus  principalis  (a prominent  sulcus  that   runs   longitudinally  in  the middle of the lateral frontal  cortex of the monkey). It also became clear that the delay was a critical variable for the impairment on these tasks (see Petrides  1994 for a review).

By the  early  1970s, the  method  of  recording  the activity  of  single neurons  in alert  monkeys  as  they performed  various cognitive tasks was perfected and a number of studies appeared  that recorded  the activity of  single  neurons   in  the  prefrontal  cortex  during delayed response performance. Fuster  and Alexander (1971) in  the  United  States  and  Kubota and  Niki (1971) in Japan  were the ﬁrst to record such neuronal activity. This work demonstrated that certain neurons in  the  lateral  prefrontal cortex  respond  speciﬁcally when a particular location is indicated as the one to be remembered   and  continue   to  discharge  during  the delay period  until  the  choice has  been made.  Thus, these neuronal responses appear to maintain temporarily  the processed  information. This early work and  several later  studies  by Goldman-Rakic, Miller, and co-workers clearly established the existence within the  prefrontal cortex  of sustained  neuronal  activity during  the delay period  of various  tasks  (see Fuster 1997 for a review).

An alternative  theoretical  model of the role of the different  lateral  prefrontal cortical  areas  in working memory  was proposed  by Petrides  (1994), based  on work that  further  analyzed  the nature  of the impairments   on  memory   tasks   by  human   patients   and monkeys  with prefrontal lesions. It was argued  that the existence of delay neurons in the prefrontal cortex, although implying that  some neuronal  computations are occurring  there during the delay, does not require the conclusion that the primary role of the prefrontal cortex is the short-term maintenance of information. For  instance,  neurons  with sustained  activity  during the delay in memory tasks can be observed in virtually every part of the cerebral cortex, as well as in several subcortical  structures.  In addition, there is the major puzzle that  patients  with damage  to the lateral  prefrontal  cortical  region  can  perform  well on  several standard  short-term memory  tests,  such  as  simple recognition,    digit   span,   and   story   recall.   These patients, however, are impaired on the self-ordered working  memory  tasks  in which successful performance cannot  be based  simply on the maintenance of information in  short-term memory  but  requires,  in addition, the  executive  process  of  monitoring that information.  In  the  self-ordered   working   memory tasks, the subjects are presented with different arrangements of the same set of stimuli and, on each trial, they have to select a different stimulus until all have been selected once. Successful performance requires the subjects to compare  carefully those stimuli that  they have already  selected with those still remaining  to be selected. In other  words,  events in working  memory must be monitored closely. It was, therefore,  argued that the problem of patients with prefrontal lesions lies not  in  memory  per  se,  but  in  the  application  of executive processes on certain memory tasks (Petrides 1994, 2000).

In  work  on  the  monkey,   where  lesions  can  be restricted  with precision  within particular regions of the brain, it was demonstrated that damage to the mid- dorsolateral part  of the  prefrontal cortex  results  in severe impairments   on  these  self-ordered  tasks  and related tasks that require the monitoring of externally ordered  stimuli (see Petrides 1994). Further evidence of the importance of the mid-dorsolateral prefrontal cortex to the monitoring of information within working  memory   comes  from  functional   neuroimaging studies  on  normal   human   subjects  that  have  consistently    shown    increased    activity    in   the   mid- dorsolateral prefrontal region  when  the  monitoring requirements of  a  memory  task  are  high  (Petrides 2000). In a study by Courtney  et al. (1998) in which monitoring and  manipulation were minimized,  activity related speciﬁcally to the maintenance of an active mnemonic  representation of spatial  information was observed  in a region  that  was posterior  to the mid- dorsolateral prefrontal region,  suggesting  that  posterior dorsolateral frontal cortex may play a role in the focussing of attention on information that  is held in posterior  cortical regions.

2.    The Temporal And Parietal Cortex And Working Memory

A large number of studies with patients who had sustained  lesions limited to posterior  cortical  regions have documented impairments  in short-term memory, thus providing evidence that the temporary maintenance of information may be occurring  in posterior cortical regions (see Vallar and Shallice 1990). There are  several  reports  of  patients  with  a  selective impairment  in auditory–verbal short-term memory after lesions in the inferior parietal region of the left hemisphere.  These patients  may be able to maintain and repeat single numbers, letters, or words presented auditorily,  but  their  span  (i.e., the  number  of items that  they can maintain  after a single presentation) is severely limited (e.g., Warrington and Shallice 1969). Patients  with  severely impaired  short-term  memory spans for visual verbal material usually have lesions in the  occipitotemporal region  of  the  left  hemisphere (e.g., Shallice and Saffran 1986). De Renzi et al. (1977) have investigated  visuo-spatial  span  using the Corsi blocks  test.  In  this  test,  the  patient   observes  the examiner tap, in sequence, a number of randomly arranged blocks and has to reproduce  this sequence. Patients  with right posterior  hemisphere lesions were particularly impaired on this task, suggesting that the occipitoparietal cortex  of the  right  hemisphere  may be a key region for the maintenance of visuo-spatial information (De Renzi et al. 1997).

This notion that posterior  cortical regions may play a role in the maintenance of information in working memory receives additional support  from work in the monkey.  For  instance,  there is considerable  evidence that the anterior  part of the inferior temporal  cortical region,  which is known  to  be the  ﬁnal  stage  in the occipitotemporal  neural   system   underlying   visual object perception, is also critically involved in shortterm visual memory. This evidence comes both  from investigations  of the effects of lesions (Mishkin  1982) and from studies in which the activity of single neurons was recorded  in monkeys  as they  performed  visual short-term memory  tasks  (Fuster  and  Jervey  1982, Miller  et  al.  1991). Similar  evidence  exists in other sensory modalities. Lesions of certain parts of the superior temporal cortex have been shown to lead to a serious  impairment in  auditory   short-term  memory (e.g., Colombo  et al. 1990).

How can the evidence for impairments  in working memory both from posterior cortical regions and prefrontal cortex be conceptualized? In one theoretical model, the temporary storage and processing of incoming   and   recalled  information  is  seen  as  an integral  part  of  neuronal   computation in  modality speciﬁc and multimodal posterior  association  cortical areas (Petrides l994). In other words, neural activity in these posterior  cortical  areas underlies not  only perceptual processing and long-term storage of information,  but also short-term memory of recently processed  information which may be currently  provided by the environment or re-activated  from longterm storage.  The prefrontal cortical areas are considered to play a role in working memory as distinct executive processing  modules  that  allocate  attention to  different  types  of  information, and  monitor   the contents  of information in posterior  cortical  regions. Thus,  if working  memory  were to  be viewed as the multicomponent workspace  of current  cognitive  activity,  then  this  workspace  can  be construed  as the local computations occurring  within specialized posterior   cortical   regions   for   the   maintenance and processing of modality-speciﬁc information, within frontal  cortical regions for different aspects of executive processing and the bi-directional interactions between them.