View sample Neural Basis Of Visual Imagery Research Paper. Browse other  research paper examples and check the list of research paper topics for more inspiration. If you need a religion research paper written according to all the academic standards, you can always turn to our experienced writers for help. This is how your paper can get an A! Feel free to contact our custom writing service for professional assistance. We offer high-quality assignments for reasonable rates.

Human thought makes use of diﬀerent forms of mental representation; some language-like and some more visual or spatial. The term ‘mental imagery’ refers to the latter. It plays a central role in many cognitive abilities, from creative problem solving to strategies for improving memory. This research paper will review the current state of knowledge on the neural bases of mental imagery, beginning with the controversies in cognitive psychology that motivated the neuroscience research.

Much of the early history of imagery research was devoted to discriminating imagery from verbal thought, and characterizing some of its diﬀerences in functional information-processing terms. Allan Paivio (e.g., 1971) addressed these issues within the context of memory research. He demonstrated that, in ostensibly verbal learning tasks, imagery aﬀected memory encoding. Though a program of research in which subjects learned words, which either lent themselves to concrete images or not (e.g., banana vs. vacation), with or without imagery instructions, he gathered evidence in support of a ‘dual coding hypothesis.’ According to this hypothesis, imagery and language are two distinct forms of mental representation. Imagery was therefore helpful in verbal memory tasks because, in eﬀect, it doubled the number of representations being stored.

A challenge to this view came from Zenon Pylyshyn (1973), who questioned the computational feasibility of storing visual images, and raised a number of issues concerning the role of imagery phenomenology in the information processing that underlies thought. This challenge brought an empirical response from Stephen Kosslyn (e.g., 1978), who devised experimental tasks in which the visual-spatial properties of images could be shown to aﬀect subjects’ information processing. For example, when subjects focus their attention on one location within an image, and then shift to a diﬀerent location, the time taken to shift is directly proportional to the imagined distance (Kosslyn et al. 1978). Findings from the laboratory of Roger Shepard also supported the visual-spatial nature of imagery. In mental image rotation experiments, images took more time to rotate through larger angles (Cooper and Shepard 1973).

As evidence accumulated that imagery is a distinct form of mental representation from linguistic or propositional thought, the question of its relation to visual perception came to force. Early work on this topic was pioneered by Ron Finke (e.g., 1980), who demonstrated many detailed and striking similarities between mental images and percepts. For example, he reported that mental images had similar-shaped ﬁelds of resolution to the perceptual visual ﬁeld.

The relation between imagery and perception can also be assessed in terms of their respective neural substrates. Indeed, many of the alternative interpretations that plagued the purely behavioral approaches to mental imagery did not apply to the neural data. An initial review of the literature on imagery and the brain, motivated by the need for more decisive evidence concerning the imagery–perception relation, uncovered a variety of relevant ﬁndings (Farah 1988). These included numerous ﬁndings of parallel impairments of imagery and perception after brain damage, which suggest that the same underlying representations are needed for both. 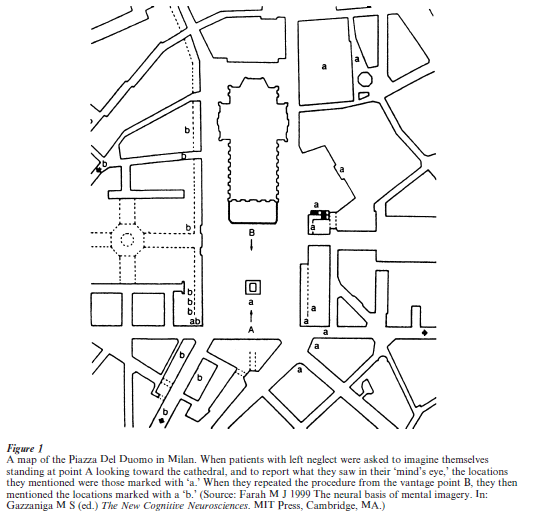 In one of the best-known demonstrations of parallel impairments in imagery and perception. Bisiach and Luzzatti (1978) found that patients with hemispatial neglect for visual stimuli also neglected the contralesional sides of their mental images (that is, the side of their image opposite the side of their brain lesion). Their two right-parietal-damaged patients were asked to imagine a well-known square in Milan, shown in Fig. 1. When they were asked to describe the scene from vantage point A on the map, they tended to name more landmarks on the cast side of the square (marked with lower case a’s in the ﬁgure); that is, they named the landmarks on the right side of the imagined scene. When they were then asked to imagine the square from the opposite vantage point, marked B on the map, they reported many of the landmarks previously omitted (because these were now on the right side of the image) and omitted some of those previously reported. 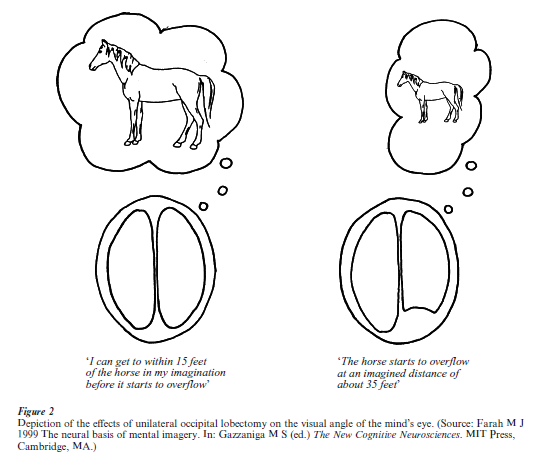 Imagery and perception also share representations at relatively early stages of visual processing. This point was demonstrated by a patient with blindness in half of her visual ﬁeld following occipital resection (Farah et al. 1992). If mental imagery consists of activating representations in the occipital lobe, then it should be impossible to form images in regions of the visual ﬁeld that are blind due to occipital lobe destruction. This predicts a reduced maximum image size, or visual angle of the mind’s eye, in this patient. By asking her to report the distance of imagined objects such as a horse, breadbox, or ruler when they are visualized as close as possible without ‘overﬂowing’ her imaginal visual ﬁeld, one could compute the visual angle of that ﬁeld before and after her surgery. It was found that the size of her biggest possible image was reduced after surgery, as represented in Fig. 2. Furthermore, the separate measurement of maximal image size in the vertical and horizontal dimensions showed that only the horizontal dimension of her imagery ﬁeld was reduced signiﬁcantly. These results provide strong evidence for the use of occipital visual representations during imagery.

The results of functional neuroimaging studies in normal subjects have been, on the whole, supportive of shared representations for visual mental images and percepts. Early studies with event-related potentials (e.g., Farah et al. 1989) and SPECT (e.g., Goldenberg et al. 1989) implicated a cortical visual locus and, as newer methods allowed better localization, it has been possible to test far more speciﬁc hypotheses concerning the precise areas within visual cortex that are recruited for mental imagery (Kosslyn and Ochsner 1994; Roland and Gulyas 1994).

If imagery consists of activating some of the same cortical visual areas used for perception, this raises the question of how these representations become activated in the absence of a stimulus. Whereas one cannot see a familiar object without recognizing it, one can think about familiar objects without inexorably calling to mind a visual mental image. This suggests that the activation of visual representations in imagery is a separate voluntary process, needed for image generation but not for visual perception and object recognition.

Neuropsychological evidence for such a process comes from patients whose perception and general memory are preserved, but who cannot visualize objects or scenes from memory. This is the proﬁle of abilities that would be expected given an impairment of image generation per se. A number of such cases have been reported in the neurological literature, with lesions generally being located in the posterior left hemisphere. In one such case (Farah et al. 1988), the imagery impairment was demonstrated in a number of ways, including a sentence veriﬁcation task developed by Eddy and Glass (1981). Half of the sentences required the use of visual imagery to verify them (e.g., ‘A grapefruit is larger than a cantaloupe’), and half did not (e.g., ‘The US government functions under a two-party system’). Eddy and Glass had shown that normal subjects ﬁnd the two sets of questions to be of equal diﬃculty (as did right-hemisphere-damaged control subjects tested by Farah et al. 1988), and that performance on the imagery questions was impaired selectively by visual interference, thus validating them as imagery questions. RM showed a selective deﬁcit for imagery on this validated task: He performed virtually perfectly on the nonimagery questions, and performed signiﬁcantly worse on the imagery questions.

RM was also tested on imagery for the colors of objects, using black and white drawings of characteristically-colored objects (e.g., a cactus, an ear of corn) for which he was to select the appropriate colored pencil. His imagery was further tested with drawing tasks. By these measures, too, his imagery was poor, despite adequate color perception and object recognition ability.

What parts of the brain carry out image generation? This question has evoked controversy. Although mental imagery was for many years assumed to be a function of the right hemisphere, Ehrlichman and Barrett (1983) pointed out that there was no direct evidence for this assumption. Most of the patient-based research supports a left-hemisphere basis for image generation (see Tippett 1992, Trojano and Grossi 1994 for reviews; see Sergent 1990 for a diﬀerent position). However, for questions of localization, we can also turn to functional neuroimaging.

Not all neuroimaging studies of visual imagery are appropriate for localizing image generation per se. The study must be designed in a way that can isolate this process, separated from perceptual and memory processing more generally. A large number of studies do meet this criterion, including those done with ERP, SPECT, PET and fMRI (see Farah 1999 for a review); in most cases, but not all, foci of activity are observed in the left inferior temporo-occipital region.

Although the bulk of evidence favors a left-hemisphere superiority for image generation, it also suggests that in most individuals both hemispheres possess some image generation ability. This hypothesis explains both the rarity of cases of image generation deﬁcit after brain damage, as well as the asymmetries observed in neuroimaging studies, and the fact that when impairments are observed after damage, the left or dominant hemisphere is implicated.