View sample Multidimensional Signal Detection Theory Research Paper. Browse other  research paper examples and check the list of research paper topics for more inspiration. If you need a religion research paper written according to all the academic standards, you can always turn to our experienced writers for help. This is how your paper can get an A! Feel free to contact our custom writing services for professional assistance. We offer high-quality assignments for reasonable rates.

Multidimensional signal detection theory (MSDT) is an extension of signal detection theory (SDT) to more than one dimension, with each dimension representing a diﬀerent source of information along which the ‘signal’ is registered. The development of MSDT was motivated by psychologists who wanted to study information processing of more realistic, multidimensional stimuli, for example, the shape and color of geometric objects, or pitch, loudness, and timbre of tones. The typical questions of interest are: Are the dimensions (e.g., color and shape of an object) processed independently, or does the perception of one dimension (e.g., color) depend on the perception of the second (shape), and if so, what is the nature of their dependence? In MSDT, several types of independence of perceptual dimensions are deﬁned and related to two sets (marginal and conditional) of sensitivity, d , and response bias, β, parameters. This research paper gives the deﬁnitions, and outlines the uses in studying information processing of dimensions. MSDT is also known as General Recognition Theory (Ashby and Townsend 1986) or Decision Bound Theory (e.g., Ashby and Maddox 1994).

Stimulus dimensions, A, B,…, represent diﬀerent types of information about a class of stimuli, for example, in a two-dimensional (2-D) case, the shape (A) and color (B) of objects. The researcher speciﬁes the levels on each dimension to study (e.g., square and rectangle are levels of shape, and blue, turquoise, and green are levels of color). A multidimensional ‘signal’ is stimulus AiBj, where the subscript indicates the speciﬁc level on the corresponding dimension (e.g., a green square is A1B3). For each physical stimulus dimension A (B,…), there is assumed a corresponding unique psychological or perceptual dimension X (Y,…).

On a single trial, one stimulus is selected from the set at random, and it is presented to the observer whose task is to identify the stimulus. The presentation of a 2-D stimulus results in a percept, a point (x, y) in X-Y-perceptual space. The observer’s response is based on the percept’s location relative to the observer’s placement of decision criterion bounds in the perceptual space, typically one bound per dimension, denoted cA, cB, … . These bounds divide the perceptual space into response regions such that if, for example, (x, y) falls above cA and below cB, the (2-D) response would be ‘21’ (or any response that uniquely identiﬁes it as A2B1). 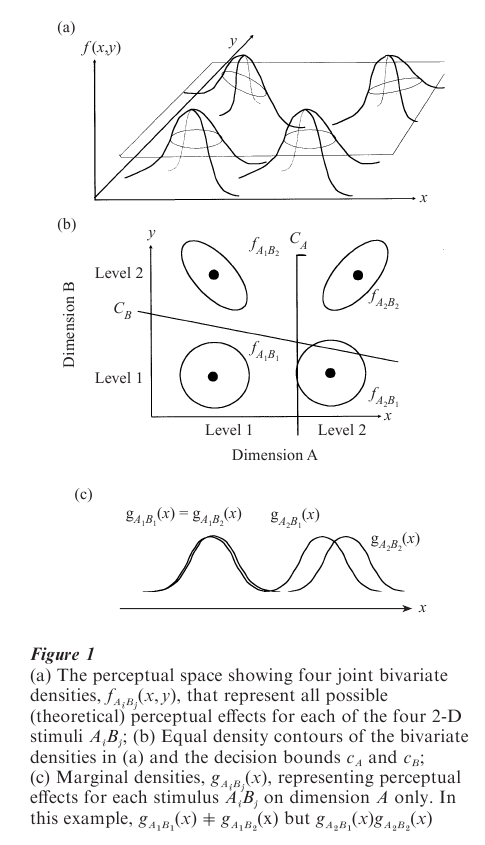 As in unidimensional SDT, multiple presentations of a single stimulus are assumed to lead to a distribution of percepts, and one distribution (usually Gaussian) is assumed for each stimulus. An example with four 2-D stimuli is illustrated in Fig. 1. The bivariate joint densities, fAiBj(x, y), are represented more easily as equal-density contours (Fig. 1(b)), that are obtained by slicing oﬀ the tops of the joint densities in Fig. 1(a) at a constant height, and viewing the space from ‘above.’ The joint density for each stimulus AiBj yields: (a) Marginal densities on each dimension, gAiBj(x) and gAiBj(y), obtained by integrating over all values of the second dimension (see Fig. 1(c) for marginal densities gAiBj(x) for dimension A); and (b) Conditional densities for each dimension (not shown), conditioning on the observer’s response to the second dimension, and obtained by integrating only over values either above (or below) the decision bound on the second dimension, for example, gAiBj(x|y > cB).

An observer’s responses are tabulated in a 4 × 4 confusion matrix, a table of conditional probability estimates, P(Rp|AiBj), that are proportions of trials that response Rp was emitted when stimulus AiBj was presented. These proportions estimate the volumes under each joint density in each response region. For example, the proportion of trials on which the observer responded ‘11’ when in fact stimulus A1B2 was presented is

2. Deﬁnitions Of Independence Of Dimensions

DS is a similar type of independence of the decisions that the observer makes about the stimuli. DS holds for dimension A (or B) when the decision bound cA (or cB) is parallel to the Y- (or X-) perceptual axis.

PI is distinguished from PS in that it is a local form of independence among dimensions within a single stimulus. PI holds within stimulus AiBj if

for all (x, y). This is statistical independence, and it is a symmetric relation in a given stimulus.

The shape of an equal density contour describes the correlation among the perceived dimensions in one stimulus. A circle indicates PI in a stimulus with variances equal on the two dimensions. An ellipse with its major and minor axes parallel to the perceptual axes also indicates PI, but with unequal variances on the two dimensions. A tilted ellipse indicates failure of PI, with the direction of the tilt (positive or negative slope of the major axis) indicating the direction of the dependence. In Fig. 1(b), stimuli A1B1 and A2B1 show PI, stimulus A2B2 shows a positive dependence, and stimulus A1B2 shows a negative dependence.

3. Marginal And Conditional d´s And βs

Marginal d´s and βs are deﬁned using the marginal densities, gAiBj(x) and gAiBj(y). Let the mean vector and variance-covariance matrix of fAiBj(x, y), for stimulus AiBj, be denoted by

respectively. The marginal d for dimension A at level j of dimension B is

The subscript x indicates that for a d on dimension A, only the X-coordinates of the mean vectors and the standard deviation along the X-perceptual axis are employed. As in unidimensional SDT, the standard deviation of the ‘noise’ stimulus (here indicated as level 1 of dimension A) is used, and without loss of generality, it is assumed that µ(A1B1) = [0 0]T(Tdenotes transpose) and Σ(A1B1) = I (i.e., σx2 = σy2 = 1, and σxy = 0). Similarly, the marginal d s for dimension B at level i of dimension A is

In a parallel fashion, marginal βs are deﬁned as

where cA and cB are the decision bounds for dimension A and B, respectively.

In the four-stimulus set, two pairs of conditional d´s and βs are deﬁned for each dimension, conditioning on the observer’s response on the second. Using the terminology of unidimensional SDT for simplicity, with level 1 indicating the ‘noise’ stimulus and level 2 the ‘signal’ stimulus, one pair of conditional d´s for dimension A, with B presented at level 1, is: (a) d (A ‘correct rejection’ on B)—conditioned on the observer’s correct response that B was at level 1, deﬁned using parameters of

4. Using The d´s And βs To Test Dimensional Interactions

These d´ and β parameters are linked theoretically to PS, DS, and PI (Kadlec and Townsend 1992). Their estimates, obtained from the confusion matrix proportions (Eqn. (1)), can thus be used to draw tentative inferences about dimensional interactions (Kadlec 1999). DS for dimension A (or B) is inferred when cA (cB) estimates are equal at all levels of dimension B (A). Equal marginal d s for a dimension across levels of the other are consistent with PS on that dimension. A stronger inference for PS on both dimensions can be drawn if the densities form a rectangle (but not a parallelogram), and this condition is testable if DS and PI hold (Kadlec and Hicks 1998; see also Thomas 1999 for new theoretical developments). When DS holds, evidence for PI is gained if conditional d s are found to be equal: Conversely, unequal conditional d s indicate PI failure, and the direction of the inequality provides information about the direction of the dimensional dependencies in the stimuli. Exploring these relationships and looking for stronger tests of PS and PI is currently an active area of research.

MSDT is a relatively new development, and with its deﬁnitions of independence of dimensions, it is a valuable analytic and theoretical tool for studying interactions among stimulus dimensions. Current applications include studies of (a) human visual perception (of symmetry, Gestalt ‘laws’ of perceptual grouping, and faces); and (b) source monitoring in memory. It can be used in any research domain where the study of dimensional interactions is of interest.