This sample culture research paper on advertising and culture features: 2700 words (approx. 9 pages) and a bibliography with 13 sources. Browse other research paper examples for more inspiration. If you need a thorough research paper written according to all the academic standards, you can always turn to our experienced writers for help. This is how your paper can get an A! Feel free to contact our writing service for professional assistance. We offer high-quality assignments for reasonable rates.

Culture  is a crucial  concept  to the  understanding   of advertising  and  consumer  behavior  because  it  is the lens through  which  people  view advertising  messages and  products.   This  research paper  reviews  and  discusses  a series of studies on the relations  between culture  and advertising. The content  is organized around  different levels of analysis of culture, for example, national level versus  individual  level. The  individualism–collectivism cultural construct  and independent–interdependent self-construal  construct  are given special attention  because extensive research has demonstrated the persuasion implications  of these  variables for advertising  content, attitude toward advertisements, and cognitive processing of advertisements.

Advertising has been defined as the nonpersonal  communication   of  information,   usually   paid   for   and usually  persuasive  in  nature,  about  products  (goods or  services)  or  ideas  by identified  sponsors  through various media.  The central  theme  or idea behind  an advertising message is called the advertising appeal.

2. Approaches To Culture In The Context Of Advertising And Consumer Behavior

Culture  consists of shared elements that provide the standards for perceiving, believing, evaluating, communicating, and acting among those who share a language, a historical  period,  and  a geographical  location.  As a psychological construct,  culture can be studied at multiple  levels—across nations,  across individuals  within nations, and even within individuals through the priming of cultural values. Regardless of how culture is studied,  cultural  distinctions  have  been  demonstrated   to have important implications for advertising content, advertising persuasion, and consumer response.

2.1.  Cultural Differences at the National Level

Individualism  and collectivism comprise the main cultural distinction that has been explored in studying both advertising   content   and   the   persuasiveness   of  ad appeals. Individualism and collectivism have been conceptualized as two powerful cultural models that represent  broad  differences  among  nations.  As Hofstede, Triandis, and others have proposed, members of collectivistic cultures endorse in-group goals, such as family integrity, harmonious  relationships,  and the well-being of the  in-group,  whereas  members  of individualistic cultures endorse being independent  and pursuing individual goals instead of in-group goals. Extensive cross-cultural  (cross-national)  data  have shown  that  North American and  most  European  countries,  such  as the United States, Canada, Germany, and Denmark, are individualistic  societies and  that  most East Asian and Latin American countries, such as China, Korea, Japan, and Mexico, are collectivistic societies.

Similarly, in other  research,  more  conformity  themes (e.g.,  respect  for  collective  values  and  beliefs)  and fewer uniqueness themes (e.g., rebelling against collective values and  beliefs) were  found  to  be present  in Korean ads compared with U.S. ads. In studying humorous appeals, ads from both  Korea and Thailand  were found  to contain  more group-oriented  situations  than those from Germany and the United States.

Existing research  has also indicated  that  culturally matched  ad appeals  are more  likely to be persuasive than  are mismatched  appeals. U.S. respondents  found ads emphasizing individualistic benefits to be more persuasive,  and  found  ads emphasizing  family or  ingroup  benefits to be less persuasive, than  did Korean respondents. Also, Chinese participants responded more favorably to collective ad appeals (e.g., ‘‘share the moments of happiness’’) than to individualistic appeals (e.g., ‘‘the joy of self-expression’’), whereas the reverse was true  for U.S. participants.  In addition,  advertisements in Mexico that depict values that are consistent with the local cultural  norms  and  roles (e.g., familial norms and roles in Mexican culture) elicited more favorable attitudes and purchase intentions than did ads that depict inconsistencies.

Product characteristics, such as whether a product is personal or shared (i.e., privately used vs publicly visible), have been found to moderate the effect of culture on the persuasiveness of ad appeals. Only for shared or socially  visible  products—those   purchased   or  used with  in-group  members—did  strong  cultural  differences emerge between Americans and Koreans in Han and  Shavitt’s 1994 study  (Fig. 1) as well as between Americans and Chinese in other research.

Within the individualism–collectivism framework, a distinction  between  horizontal  and  vertical  societies has recently been introduced.  Members of horizontal societies, such as Denmark and Sweden, value equality and view the self as having the same status as others in society. In contrast, members of vertical societies view the self as differing from others along a hierarchy, accepting inequality and believing that rank has its privileges. In comparison  with the individualism–collectivism  dimension, the horizontal–vertical dimension is less explored.  However, recent  studies  have begun to examine the implications  of the horizontal–vertical  cultural  dimension.  In 2002,  Nelson  and  Shavitt found that   members   of  a  relatively  vertical  society  (the United States) are more likely to endorse achievement values than are members of a horizontal society (Denmark).   Moreover,  Shavitt  and  colleagues’ 2002 research suggested that vertical collectivism in the United States is associated with a tendency to be persuaded  by ad appeals to status and hierarchy.

In 2000, Gurhan-Canli and Maheswaran demonstrated  that  Japanese consumers  tended  to favor products  from their  own country  over foreign products, whereas  American  consumers  tended  to  favor high quality products regardless of the countries of origin of these products.  Mediational analyses indicated that the vertical dimension of individualism and collectivism accounted  for  the  country-of-origin  effects in  Japan. This is consistent with the cultural orientation in Japan—vertical  collectivism—in  that  Japanese tend  to believe in and value the superiority of the in-group over others.

In 1991, Markus and Kitayama proposed that individualistic and collectivistic distinctions affect how individuals define or construct themselves in relation to others. According to these authors, the cultural norms of individualism  require   defining  oneself  as  an  individual whose behavior is organized and made meaningful primarily by reference to one’s own thoughts,  feelings, and  actions.  This  independent   self-construal  is associated with describing oneself with reference to individual psychological traits such as ‘‘I am easygoing.’’ On the other  hand,  the cultural  norms of collectivism require individuals  to  see themselves  as part  of harmonious relationships  and to recognize that their own behavior should seek benefits to their in-groups. This interdependent self-construal is associated with describing oneself with reference to social roles or memberships such as ‘‘I am in the gymnastics club.’’ Recent research has indicated that self-construals account for and moderate cultural-level persuasion effects. 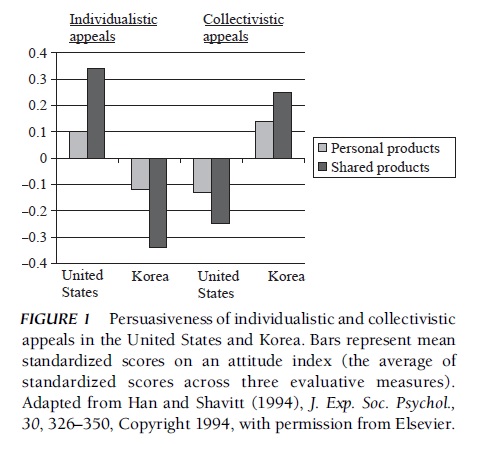 Self-construals have also been found to affect regulatory focus. Regulatory focus is built on the general hedonic   notion   that  people  approach   pleasure  and avoid  pain.  In  2001,  Aaker and  Lee found  that,  for people with an independent  self-construal, promotion focused information  (e.g., drinking  juice promotes  energy or enjoyment of life) led to more positive attitudes toward a juice product.  In contrast, for people with an interdependent self-construal, prevention-focused information (e.g., drinking juice helps to prevent disease) led to more positive attitudes.

Just as psychological research  on culture  has focused extensively on cognitive process issues, recent research has demonstrated  that a consumer’s culture or cultural orientation  influences the nature  of information  processing that accompanies a message.

Some studies along this line have focused on examining the effect of cultural orientation on persuasion by application of the Elaboration Likelihood Model/ Heuristic–Systematic Model. Individualism and collectivism appear  to be associated  with different perceptions of cue diagnosticity in the processing of ads, and these in turn  result in different patterns  of attitudinal outcomes. Because of their individualistic  tendencies, Americans  are  relatively  uninterested   in  others’ opinions;  conversely,  because  of their  collectivistic  tendencies, people in Hong Kong tend to be more affected by  the  preferences  of  others.  Consequently,  among U.S. participants,  product  attribute  information  tends to be seen as more diagnostic than do consensus cues. In contrast, in 1997, Aaker and Maheswaran found that among  Hong  Kong participants,  consensus  cues  are treated  as  relatively  diagnostic.  Moreover,  in  2000, Aaker and Sengupta’s research demonstrated  that individualistic  versus  collectivistic  cultures  are  also associated with different strategies used in resolving incongruities  between a source cue and product  attribute information. In an individualistic cultural context, attribute  information  is perceived  as more  diagnostic than is a source cue and influences product evaluations. Hence, an attenuation  strategy is used in information processing when incongruity between a source cue and attribute  information  occurs. In a collectivistic cultural context,  where source information  is relatively important and where there is less of a tendency to choose one type of information  over another,  the source  cue and attribute   information   jointly   influence   evaluations. Hence,  an  additive  strategy  is applied  when  there  is incongruity between a source cue and attribute information.

2.4.  Factors That Covary with Culture

The standard  cultural  congruity findings, suggesting that culturally matched ad appeals are more prevalent or are more likely to be persuasive, were reviewed earlier. However, a growing number  of studies have indicated that  the  situation  in  rapidly  transitioning  economies may be more complex. For example, Westernized appeals,  such  as appeals  to technology,  individuality/independence,  and youth/modernity,  have been found to be rather salient in Chinese and Japanese ads and to have been used frequently in current  Taiwanese advertising  agencies.  These  cultural   incongruity   findings could be driven by government policies regarding internal development and modernization,  public exposure to Western media, and demographic and geographic contact zones. In addition, consumers in developing countries tend to respond favorably to Western products. For example,  in  one  study  of Indian  consumers,  brands perceived  as having  nonlocal  (Western)  countries  of origin were favored over brands perceived as local. Moreover, this effect was found to be stronger for consumers  who have a greater admiration  for the lifestyle in economically  developed  countries.  These cultural  incongruity  findings  are meaningful  because,  as discussed by Zhang and Shavitt in 2003, they suggest the important  role that  advertising plays in reshaping cultural values in developing countries that are experiencing rapid  economic  growth.  Rather than  reflecting existing cultural values, advertising content in those countries promotes new aspirational values such as individuality and modernity; hence, these new values become acceptable and desirable among consumers.

As the  advertising  industry  has  become  increasingly globalized, there has been increased research attention given to the role of culture in advertising. Progress in understanding  this role has been made on a number of fronts. This research paper has reviewed empirical research on the effects of a number  of cultural  variables on advertising-related processes. Distinctions between individualistic and collectivistic cultures have been demonstrated  to have important  implications  for advertising content, advertising persuasion, and consumers’ cognitive responses. Parallel effects of culture and self-construal  (independent vs interdependent)  have been shown as well. In addition, studies on the distinction between horizontal  and vertical cultural  orientations within individualism–collectivism  have begun to show advertising implications.