View sample crime research paper on sex offenses against children. Browse criminal justice research paper topics for more inspiration. If you need a thorough research paper written according to all the academic standards, you can always turn to our experienced writers for help. This is how your paper can get an A! Feel free to contact our writing service for professional assistance. We offer high-quality assignments for reasonable rates.

Crimes against children did not develop into a recognizable class of the criminal law of the United States until the latter half of the twentieth century. As societal recognition of both physical and sexual abuse of children increased in the 1960s and 1970s, legislatures throughout the United States revised criminal codes to more precisely define crimes against children. Although statutes describing sexual offenses against children are far from uniform, the development of the laws demonstrates societal recognition of the existence of such crimes and legislative acknowledgment of the need to define the crimes with specificity.

Early English laws defining sexual offenses against children provided the foundation upon which later American laws were constructed. The first such law, the Statute of Westminster I from 1275 A.D., stated that none should ‘‘ravish, nor take away by force, any Maiden within Age, neither by her own consent, nor without.’’ The offense was a misdemeanor punished by ‘‘two years imprisonment and fine at the king’s pleasure,’’ and applied only to sexual intercourse with a female ‘‘within Age’’—defined by most commentators as under twelve years old. Forms of sexual activity with a female child that did not involve sexual intercourse were not prohibited by English statute until late in the nineteenth century.

Jurisdictions in the United States incorporated into the common law and statutes of the states variations on the Statute of Westminster I and its successors. Thus, from their inception until the first half of the twentieth century, all states recognized sexual intercourse between an adult male and a female child as a crime, commonly labeling the offense carnal knowledge of a child or statutory rape. However, most states did little beyond this to proscribe sexual conduct between adults and children.

All modern statutes defining child sex crimes contain two essential elements: the sexual conduct at issue and the age of the child. Sexual conduct is classified by statute into acts of sexual penetration or acts of sexual contact. No longer limited to sexual intercourse between a male adult and a female child, acts of sexual penetration in most states include any intrusion of the sexual organ of one person into the sex organ, mouth, or anus of another person. The offenses are nearly uniform in the use of gender-neutral language, thus including acts committed by both male and female perpetrators against both male and female children.

The early English model of creating one simple age of consent has been almost universally abandoned in the United States, with the vast majority of states creating multiple tiers of offenses in which the severity of the offense varies depending on the age of the child. First tier offenses apply to sexual acts with younger, typically prepubescent children, an age most commonly identified by the states as children younger than twelve, thirteen, or fourteen years old.

Second tier—and in some states third tier— offenses apply to sexual acts with older children, generally those children who have reached the age at which puberty commonly begins. In Virginia, for example, the most serious penetration offense, a felony, applies when the victim is under thirteen years old; a lesser offense, also a felony, applies to children thirteen and fourteen years old; and a misdemeanor offense applies when a child is between the ages of fifteen and seventeen years old.

A feature found in a majority of states is a separate offense or an enhanced penalty when an offender is in a position of trust or authority with respect to the child victim. Consistent with psychological literature demonstrating that significant harm is caused by a violation of trust, these offenses establish stronger penalties when a person exploits an authority relationship to sexually abuse a child. In some states a position of authority is limited to one in a parental role, while other states more broadly include teachers, clergy, and others in a position of authority with respect to the victim.

Another common innovation is language exempting from the scope of the criminal law sexual relations between children who are both below the age of consent. One method of accomplishing this goal requires proof of an age differential between perpetrator and victim. Many states have adopted a four-year age differential recommended by the Model Penal Code ‘‘to reflect the prevailing pattern of secondary education,’’ though the age gap is smaller in a few states and larger in others. A different method of addressing the same concern is to create as an element of the offense a minimum age the offender must have attained. In Alaska, for example, a nonfamily offender who has sexual intercourse with a child under thirteen must be sixteen years of age or older; if the victim is sixteen or seventeen years old, the offender must be eighteen years or older. Some states combine the two approaches, requiring both a minimum age for the offender and an age differential between participants.

A handful of states create an offense for the continuous abuse of a child. A child who is abused repeatedly over a period of time may not be able to recall with specificity individual acts of abuse. Continuous abuse statutes eliminate the requirement that prosecutors prove a series of discrete acts, requiring only that the prosecutor prove a specified number of acts occurring within a designated time frame. 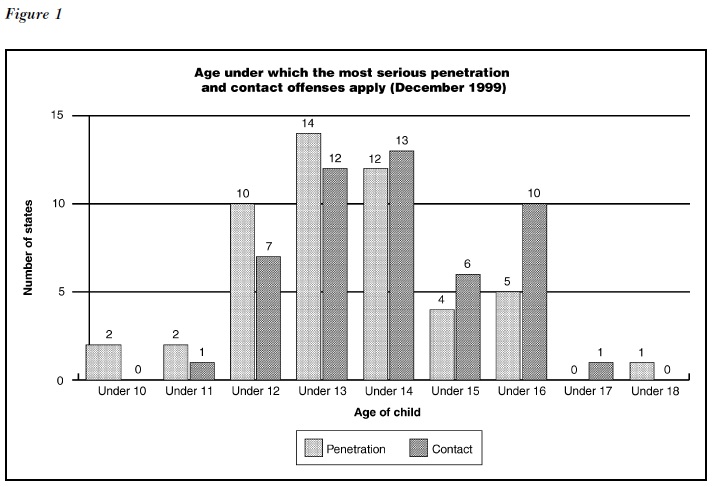 During much of the 1900s, several states required proof of a female victim’s chastity, particularly when the victim was an older adolescent. This element is now rejected by nearly every state, allowing prosecution regardless of a child’s virginity. A large minority of states, however, require proof that the child is not married to the adult, thus allowing a defense in some of these states if the defendant marries the child prior to the prosecution.

Relationship to Other Sex Crimes

Both federal and state laws establish a large number of sexual crimes against children addressing acts related to, but not directly involving, sexual touching between an adult and a child. For example, crimes such as child prostitution and child pornography—commonly referred to as child sexual exploitation offenses— target manipulation of a child for an adult’s sexual gratification. The prohibited conduct in child exploitation offenses, however, is the taking of pictures or selling of a child’s body rather than the direct sexual contact between an adult and a child.

Offenses such as incest, sodomy, fornication, and the crime against nature—commonly classified as crimes against morality—condemn particular sexual acts regardless of the age of the participants or the consensual nature of the act. These offenses are largely obsolete and do not constitute a significant weapon in the modern child abuse prosecutor’s arsenal. Statutes designed to protect children from adult sexual manipulation are better suited and more frequently used to prosecute an adult for engaging in sexual activity with a child. 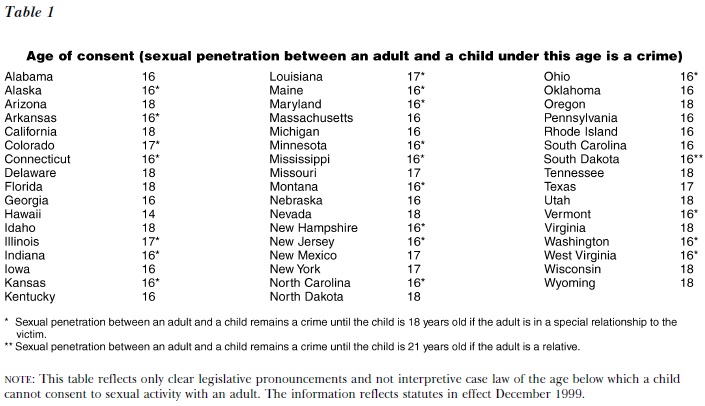